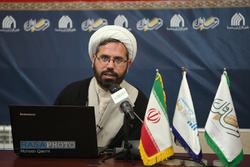 RNA - The course on the Analysis of the Jurisprudence (Fiqh) of the Communication was kept on, and this session was presented by Hujjat al-Islam Asqar Islami Tanha, the member of Baqir al-Olum University’s faculty of culture and Communications. The said course is being specifically held in the month of Ramadan by Vasail Specific Centre of the Governmental Jurisprudence in the conference hall of Rasa News Agency.

Following the previous sessions, Hujjat al-Islam Islami Tanha dealt the difference/s between the religious and secular approaches to the universe and then said, “The secular approach encompasses one or maximally two levels; the universe is bounded to its physical and visible forms, and if this view believed in metaphysics, it would include a second level. However, the Quranic view is composed of 3 levels, the mundane, celestial and reason levels (worlds); and according to the wisdom and philosophy approaches, there are also two worlds of nature and example.”

The seminary teacher and university professor, stressing that we should have religious understanding through the Islamic system, elaborated on this science based on the stances of the Islamic scholars and said, “regarding the definition of “at-Tawasul” (communication), it is commonly said that we can understand this concept without being tangled with secularism.”

There is no absolute vacuum area

The professor of Baqir al-Olum University, pointing to the Arabic definition of secularism, said, “Secularism means separating something from something that have been connected in essence. Secularism creates a gap between the religion and different areas of the life. Modernity created a separation between the religion and the whole life of the man. Secularism has been wrongly translated by some translators as customisation or custom-orientation, yet its true translation is worldliness.”

He added, “As the man sought to stand out of the domain of the Heavenly Divinity, the modern mad separated the religion from all areas of his/her life. And the religion was separated from science, politics, ethics and arts. In Arabic, the separation of religion from policy is called “al-Amania.”