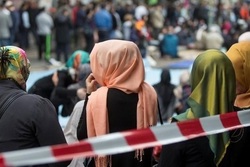 Rasa - The hijab is a religious covering that is worn by Muslims, mostly among women. It generally conceals the neck and hair. Most Muslim women wear the hijab, while refraining from wearing tight clothing. Donning the hijab and also generally observing a modest Muslim style of dressing offers these benefits.

RNA - The hijab is a religious covering that is worn by Muslims, mostly among women. It generally conceals the neck and hair. Most Muslim women wear the hijab, while refraining from wearing tight clothing. Donning the hijab and also generally observings a modest Muslim style of dressing offers these benefits.

The hijab is regarded like an indication of dignity and purity. It highlights Muslim women as chaste and pure women. It also sets the wearer apart from immoral behaviors linked to women who wear immodestly. Actually, the hijab acts like a screen between chaste Muslim women and the world’s evil.

Most men do not make lewd gestures or whistle when a woman wearing a hijab passes by. In fact, men view the hijab like a sign that says off limits and thus do not approach such women. Muslim women by and large have a low chance of being exploited for their femininity and beauty in contrast with other women.

The hijab also benefits Muslim women by forcing people, particularly men, to go past the outer appearances and focus on the women’s intellect. Rather than assessing woman for her mind, the society usually assesses her based on physical traits.

People in western nations are known for sacrificing health and financial savings so as to have expensive plastic surgery with an aim of meeting unrealistic standards of beauty. However, through wearing a hijab, Muslim women can go about their normal duties without worrying about impressing other people.

Covering the hair can also have a beneficial effect on the female psyche as well. Studies of women being interviewed for jobs show that there is a high correlation between what they wear and their perceptions of how successful they will be in their interviews. There are many more examples of how what we wear can influence how we act.

Wearing a hijab does not have demerits and those who wear it have more strength and confidence as women become less mindful of their physique and appearance.