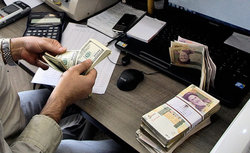 In 1983, Imam Khomeini, Ayatollah Golpaygani, Ayatollah Marashi Najafi were the sources of emulation; the legislation was given to them and verifying it, they said that the Act is according to the Islamic Jurisprudence, especially the Imamiah Jurisprudence (Shiite Jurisprudence), and six month later, it was given to the government and the central bank in order to prepare the regulations and instructions appertaining to this law, and it was implemented unanimously in 1984.

RNA - The Western banking industry is 400 years old, it is active in all countries, both Muslim and non-Muslim one, except in Iran and Sudan. Although all the economic thinkers have dealt with this Western model of banking and composed some papers and books in this regard, there is no Western scientist claiming that the Western banking is empty of defects. There are several challenging issues in the area of pecuniary and banking affairs, some of which remained stull unresolved by the Western scholars.

In that time, Imam Khomeini, Ayatollah Golpaygani, Ayatollah Marashi Najafi were the sources of emulation; the said legislation was given to them and verifying it, they said that the Act is according to the Islamic Jurisprudence, especially the Imami Jurisprudence, and six month later, it was given to the government and the central bank in order to prepare the regulations and instructions appertaining to this law, and it was implemented unanimously in 1984.

There are some criticisms over the implementation of the said law

Then, it was proposed to Imam Khomeini that, similar to other Muslim countries, we can have both usury and non-usury banks, yet he turned the proposal down, and accordingly, the non-usury model was chosen. The non-usury model has been used for 35 years and since 1984.

In the said era, the sources of emulation have not objected to the law itself, but to how it is being executed. The Operational Banking Act was properly devised in that time, though there are some defects and there are some issues neglected by the Legislator in that time; therefore, the law is required to be corrected and completed. Yet there are some serious concerns over the implementation of the non-usury model of banking, some of which should be resolved by the members of the seminary and university.

Four chief concerns voiced by the sources of emulation

1. The transactions done within the non-usury banking, though falling into the category of the religious transactions, are fictitious; for example, through the instalment-based sale, the banks doesn’t purchase or sell anything to acquire interests: therefore, no true transaction is conducted indeed.

3. The sources of emulation point to the late payment penalty as a serious concern; according to Islam, a debtor is supposed to attempt to pay back his/her debts, yet if s/he goes bankrupt, s/he ought to be given the time until he can pay back his debt without being fined, as the penalty on late payment is usury, and some sources of emulation argue that what mentioned applies to the late payment penalty received by the banks, and it is usury and religiously illicit.

Solutions/In our banking system, the agency and the customer both act negligently

Among the aforementioned concerns, the first is the fictitiousness of the transactions, it occurs due to the negligence of the people upon the conclusion of the contracts, they don’t read and examine the contracts properly, and many frauds occurred through contracts are done due to the said malady; however, in the other countries, the usury-banks appropriate a time for explaining the contents of the contract, and the client is required to examine and understand all the clauses of the related contract.

Both the Iranian banking agent and client are negligent, and it has caused different problems and thus, the sources of emulation are right in this regard; the said issue should be dealt with, as the fictitiousness of the transactions is the immediate outcome of the mentioned negligence.

The Central Bank has taken a measure to provide the clients with a summary of the contents of the contract in bold on the page margins, and the banking agent is required to read the main content to the client so that s/he well understands it. The contract of the instalment-based sale was replaced with the contract of interest, as the sale through instalments has a restricted domain and the contract of the interest is not bound to specific goods or services; this substitution was conducted by the Central Bank in order to resolve the problem of the fictitious transactions, a measure that was welcomed by the sources of emulation.