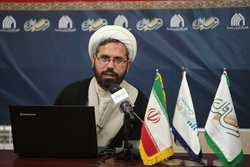 Aristotle regards the language as a conventional relationship, however, according to Plato, there is a natural relationship between the signifier and signified.

RNA - Hujjat al-Islam Islami Tanha professor of Baqir al-Olum University called the majority of the western sciences deviated and said, “Secularism means separating a religious issue from religion. Even the term doctor has some religious sense; a doctor used to be someone who extracted the rules of life out of the Bible and the Old Testament, for instance, the children of Levi, who were able to extract the Jew doctrines, were doctors. Indeed, the term “doctor” means jurisprudent, and not as it is referred to as scientist nowadays. Many of such topics are basically religious, but their religious dimension has been removed through the pass of the time.”

About the differences of Plato and Aristotle on language, he stated, “Aristotle regards the language as a conventional relationship, however, according to Plato, there is a natural relationship between the signifier and signified. We use the meaning of the term “verse” both against the sign and phenomenon in phenomenology. In the holy Quran, the term verse is linked with multiple words such as wisdom, Jurisprudence (Fiqh), understanding, thinking, lip, blessing, belief, revelation, rage, punishment and etc.”

The seminary teacher and university professor, dividing the verse into two parts, said, “The first part refers to God, the Sublime, and the other encompasses the man. The verse is revealed to them man by Heaven, the man understands its meaning; in order to refer to understanding, God uses some terms such as “wisdom, understanding, thinking, and observation.”

The professor of Baqir al-Olum University added, “The part of the body employed in understanding the verse is called the lip, heart or benefits by Quran. The process of understanding the verse can attain happy news, such as blessings and mercy, or arrive at some warning on the Heavenly retaliation, punishment and rage. The man either spurns the verse or certifies it, the act whose immediate consequence is appreciation, piety or heresy, and its final result is either faith or infidelity.”

The intense relationship between the term “verse” and “guidance”

Hujjat al-Islam Islami Tanha, mentioning that there is some intense and deep links between the term verse and guidance, added, “The acts of certifying or spurning demonstrate the authority (power to choose) of the man; but within the Quranic literature, the term guidance points to the Heavenly want (will); and thus, God tells the prophet “you are unable of impacting those led astray by God.”

He stated, “The man can accept the Divine Guidance and be directed; if he does so, he will move towards the heaven; otherwise, he will go astray towards the hell.”

The seminary teacher and university professor, pointing to the links between the terms of guidance and the guide (director), said, The concept of “the path” is implicitly present within the term “guidance2; “Indeed, We have guided him to the path, he is either grateful or ungrateful”; if we desire to be guided and attain the Divine Guidance on this path, we must know and grab the verses. We will be able to open the path towards the Islamic theorisation using the keyword “verse.”