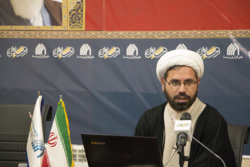 The study of signs was started through the rise of semiology and semiotics; though there are some substantial discrepancies between them. Charles Sanders Pierce called this science semiotics, yet it was named semiology by Ferdinand de Saussure.

RNA - The professor of Baqir al-Olum University called the majority of the western sciences as deviated and said, “Secularism means making a religious issue non-religious. Even the term doctor include some religious sense; a doctor used to be someone who extracted the rules of life out of the Bible and the Old Testament. Indeed, the term “doctor” means jurisprudent, and not as it is referred to as scientist nowadays. Many of such topics are basically religious, but their religious dimension has been removed by the pass of the time.”

Following the sessions specifically held on the occasion of the month of Ramadan by Vasai Specific Centre of the Governmental Jurisprudence, Hujjat al-Islam Asghar Islami Tanha, the assistant professor of Baqir al-Olum University’s faculty of culture and communications, presented the fifth session on the Jurisprudence of Communications. Calling the versology (the study of verses as a science) the counterpoint against the semiology, he stated, “The term verse has been frequently used by Quran both singularly and in plural, and it shows that theorisation should specifically and diligently be carried out on this key term.”

He said, “The study of signs was started through the rise of semiology and semiotics; though there are some substantial discrepancies between them. Charles Sanders Pierce called this science semiotics, yet it was named semiology by Ferdinand de Saussure. In order to found semiology, they both borrowed from logics and syntactics; Syntactics here refers to the general sense of this science encompassing morphology, the jurisprudence of discourse and similar sciences.”

The professor of Baqir al-Olum University explained, “there are four types of words; 1. The vocal form produced by the mouth; 2. The written form of the words; 3 the vocal image referring to the mental image; 4. The object in the external world. According to de Sausure, the first and fourth categories are not the target of and covered by the semiology.”

Pointing to de Sausure’s concern through the conventional semiology, Hujjat al-Islam Islami Tanha said, “However, Pierce's view was different, he believed that a sign is composed of three components. According to him, there is an intense relation between the signifier and the signified making them inseparable, unless they can be separated through a critically literal analysis, as it is commonly mentioned, the words are solved into the meaning.”

Explaining the components of a sign according to Pierce, he expressed, “According to Pierce, the elements of a sign are: the signifying element, the object and the interpretant. The signifying element here is similar to de Sausure’s signifier, the interpretant is like what is referred to by de Sausure as signified, but the object is absent in de Sausure’s theory. The cause of the difference between the views of Pierce and de Sausure is that they didn’t agree over the breadth of the domain of the semiology.”

The seminary teacher and university professor continued, “According to Pierce, semiotics isn’t confined to conventional signs, yet, he regards the linguistics, anthology, the science of life, and cosmology as the basic subcategories of this science. According to de Sausure, if you are not aware of the convention, your mined won’t be directed from the signifier to the signified.

Mentioning that both de Sausurian and Piercian views are still employed in the study of the contemporary communications and have their own proponents, the professor of Baqir al-Olum University maintained, “these two approaches have originated from the ancient Greece, and they managed to develop semiotics using the views of the Western and ancient scholars of semiology.”