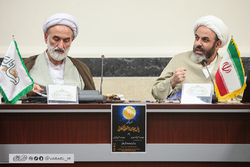 He stated, “in order to understand the verdict of such principles, the essence of such currencies is required to be understood. Currently, we can speak solely relying on the basics. For instance, whether are such digital currencies regarded as asset?”

The professor of Qom seminary continued, “The governmental jurisprudence is different from the individual one because in the former if the Guardian of the Islamic Jurist (Wali Faqih) interprets an issue differently from other Jurisprudents, he is permitted by God to preclude other interpretations. Indeed, the governmental order only applies to the position of the Guardian of the Islamic Jurist”.

He finally added, “The levels of epistemology on the interpreted principle should be considered. Generally, our system of jurisprudence has been focused on the first level of it.

Dr Hujjat al-Islam Turabi, as the second presenter, then started his speech and said, “Regarding epistemology, there are some differences among jurisprudents. Some believe that the jurisprudent can exercise his authority on the canonical issues that require a framework.”

He added, “there are two views in this regard; when the jurisprudent, according to the common or a specific law, and considering the limits defined for the issue, introduces his interpretation and defines it as an obligation, it is a participation in the issue of Judicial Decree (Fatwa). Therefore the jurisprudent is also responsible for the religious rules and principles”.

The member of the Council for Providing Advice on a Religious Matters, belonging to Ayatollah Subhani’s Office, stated, “the encoded money is a type of electronic money. What is important about the encoded currencies is that, due to such currencies, the government loses some capitals”.

He then stated, “Bitcoin was coined to frustrate the dominance of non-virtual currencies. And it’s being welcomed by the society has been regarded as its source of success, as it has almost been achieved”.

In the end, some questions were asked by the participants and the said professors provided them with proper answers.

It should be noted that, a comprehensive report on this meeting will be soon released by the website of Vasael Special Center for Governmental Jurisprudence this session.

Prepared and Edited by: Muharram Atashafrooz