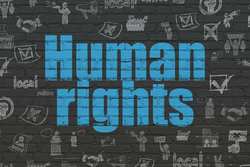 In addition to the general and principal issues around the human rights, there are some differences between human rights and jurisprudence over some minor issues as well as the determination of the meaning/example.

RNA - In another part of his speech, Hujjat al-Islam Taleqani pointed out that, in addition to the general and principal issues around the human rights, there are some differences between human rights and jurisprudence over some minor issues as well as the determination of the meaning/example.

Then, he described all the 30 articles of the international declaration of human rights as generalisable falling into the following chief six categories:

1. The right of (enjoying) security against murder, torture and genocide;

3. The right of freedom of expression, demonstration, formation of political movements and etc.;

4. The political rights such as the right of objection, vote and governmental employment;

5. The right of equality in citizenship and legal equality, presented through topics such as the graded citizenship;

6. Social rights such as access to job, services, health and welfare.

The seminary teacher explained, “the adaptation of the details of such issues has led to some disputes; for instance, whether does the jurisprudence deems data-x-items such equality, liberty and security, mentioned by the human rights, as proper/desirable?

Islam's confrontation with the human rights

The head of the group for the philosophy and discourse at the education centre of Khorasan Razavi Islamic Propagation Office said that the Shia’s approach to human rights has been affirmative for some decades, and then maintained, “when an issue related the human rights was presented, it was generally affirmed as a positive item, yet it was said that our religion includes some better data-x-items in this regard. The prelude to the Rights of the Man, in the Islamic Encyclopaedia on Jurisprudence, authored by Ayatollah Hashemi Shahroudi is a characteristic example in this regard.”

He explained, “It should be attended that there is/are differences between human rights and the International Declaration of the Human Rights. People such as Ayatollah Hashemi Shahroudi have regarded the declaration of the human rights as human rights, though they aren’t the same, and the former is a text proposed by some liberal and secular characters after the second world war, composed under the influences of crises, emotions, pressures and political supports, and there are some considerable discrepancies between the laws/rules of this declaration and those of the jurisprudence.

He stressed, “It should be attended that many of their arrangements are the cause of dispute, for example, there is no consensus over the question “what is the wisdom according to their rule?”  In accordance with them, wisdom includes both the general ability owned by all, and the modern wisdom, however this specific sense of wisdom have not been considered by the rule of the following the wisdom. And the ethical basis of some of them is relativism and non-realism. Although Mutazila and Imami sects, pointing to the rational followings, deem ethics as realist.

Moreover, there has been no dispute over the minor issues and the meaning of the concepts such as liberty and equality in the world of Islam. For instance, there were some disputes over the absolute or conditional liberty, the occupation of the governmental positions during the Constitutional Revolution. During the era of Constitutional Revolution, the Western terms and expressions weren’t used so that what was used would be simple, act efficiently provoking the people and finally create some mass rising. People like Sheikh Fazlollah Noori disapproved of such principles.

Mashhad Seminary’s teacher of Islamic sciences, saying that some apparent similarities between the data-x-items of jurisprudence and human rights ought to be dealt with, maintained, “although persons like Stuart Mill haven’t bounded the liberty solely to the principle of harming/damaging, it seems that his belief is similar to the Islamic principle of “there is no harm and harmful in Islam”, yet they are different. What people like Mill mean are the material, physical and secular harms, and the spiritual harms and those damaging the fate of the man in the Other World are not meant by them.

He finally stated, now it should be examined that whether there is anything called the Human Rights in the Islamic law? Whether can the human rights stand or include the wise ruling which is similar to Imamat? These are some instances that should be introduced and discussed within the jurisprudence.