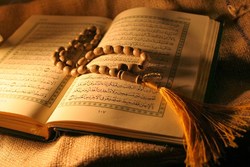 Various meanings of distortion and alternation have been expressed. The Islamic scholars ‎agree with view of less or more non-distortion and non-alternation in the Holy Quran. In ‎other words, neither anything has been decreased nor anything has been increased which ‎was not present inside in the genuine manuscript of the Holy Quran. However, regarding to ‎be decreasing or to be adding of phonetics and motions, it must be said that there has not ‎been any kind of distortion occurred because the customary and in use recitation of at ‎present time, is the same recitation that was regular in the beginning of Islam and the ‎remaining recitations are a kind of jurisprudential investigation that have never been got the ‎status of to be customary and in operation. ‎

Anyway, though even we don’t accept this view, yet it is admitted fact that the genuine ‎manuscript of the Holy Quran is amongst one of these same recitations that are present and ‎which does not contaminate the immorality the Holy Quran.‎

Distortion (alteration) has various meaning, for the clarity, first of all, we should focus our ‎attention on these various meanings and views of the Muslims about them. ‎

‎“Distortion of meaning” is this that they express the meaning of verse and interpret a verse ‎in such a way which would be contrary to its true consideration. So, therefore, according to ‎this consideration, all ‘exegesis by self opinions’ and erroneous and incorrect explanations ‎that were mentioned up to now and will be mentioned in future, is a kind of ‘distortion of ‎meaning’ of the Holy Quran.‎

‎2. Distortion of to be less or more alphabet and movements‎

along with protection of the Holy Quran and without depletion of it, in such a way that it ‎would be too hard to distinguish that which one is the genuine Quran in actual fact, like ‎whatever is present in various kinds of recitations. Definitely, one of these recitations is ‎correct, while in the case of the remaining recitations either they have added something or ‎lessened something else.‎

Some Shi’ah scholars are of the faith that the recitation of Hafs from Asim that is in practice ‎at present time, is the real recitation of the Holy Quran that has been transformed from ‎generation to generation and hand to hand, the regular and successive Holy Quran is the ‎same Holy Quran amongst the people while, the remaining recitations are a kind of ‎jurisprudential endeavor.‎

As long as concern of fact that this Holy Quran has been related to Hafs, it doesn’t mean ‎that Hafs recited Holy Quran in such way and the people followed him but its means that ‎Hafs followed the recitation that was regular and in practice amongst the people.‎

It has also been narrated from Imams (Infallible Leaders) that the Holy Quran was revealed ‎according to this statement “the Quran is single word, from the Individual.” and these ‎traditions prove the remaining recitations to be erroneous while prove to be perfection of ‎one of these recitations.‎

If we enclosure this tradition with other tradition in which people have been commanded to ‎recite the Holy Quran as people recite it, we will come to know that the genuine Quran is the ‎same which is successive and in practice amongst the people. Therefore, it has not been ‎occurred any distortion and alteration in the phonetics and alphabets of the Holy Quran. ‎

‎3. By distortion mean to be less or more word or words along with the protection of real ‎Quran.‎

It has been said that such kind of distortion, in the Holy Quran was occurred in beginning of ‎Islam and historical reports express this fact but with the unity of Uthman’s manuscript (of ‎the Holy Quran), this problem was solved. After collection of the Quran, Uthman ordered to ‎his governors that the manuscripts (of the Holy Quran) which opposed the manuscript ‎collected by him, should be burnt in to ashes.‎

‎(However according to faith of Shi’ah School of Thought, Uthman’s manuscript of Quran was ‎the same Quran that was in practice and regular by the era of Holy Prophet (s)). Therefore, ‎in this perspective and meanings, this kind of distortion and alteration, was disconnected ‎practically but earlier than this era, it was present.‎

‎4. By distortion means to be less or more verse or verses or chapter along with safety of ‎real Quran and conformity regarding to recitation of Holy Prophet (s).‎

whatever is present amongst the Sunni School of Thought like; some of them consider ‎“Bismillah al-Rahman al-Rahim” (In the Name of God the Merciful, the Compassionate), as a ‎part of revelation, in the beginning of chapter while, on the other side, some others, don’t ‎consider them as a part of revelation. However, all the Muslims are agreed on this view that ‎Prophet (s) used to recite Bismillah (in the name of God) in the beginning of each chapter ‎except chapter of tawbah (atonement).‎

5. Distortion to reduction or addition:‎

It means, either the Quran that is present in our hands would not be consisting of whole ‎Quran or anything other would be added in it from outside. Shi’ah School of Thought has ‎refuted the occurrence of such kind of distortion and alteration and many arguments have ‎also been described in this context that would be expressed in its own place.‎

Therefore, on the ground of phonetics and movements, although expect the recitation in ‎practice, others recitations are present insides the books yet these are a sort of ‎jurisprudential endeavor which are not successive. Nevertheless, the scholars of Quranic ‎sciences have narrated criterion in order to identify the correct or incorrect recitations. ‎However, in case of accepting this kind of distortion in the Holy Quran, it should be said that ‎distortion and alternation in this perspective, doesn’t bring any harm to the immorality of the ‎Holy Quran; because the genuine recitation is also available and in practice. Whatever, brings ‎harm for the immorality of the Holy Quran, is distortion that means to be more words or ‎sentences or verses from the outside. According to all Muslims scholars, this kind of ‎alteration and distortion has not been occurred in the Holy Quran. ‎

No race’s blood is more colourful