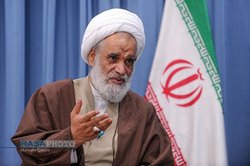 The representative of Khuzestan in the Assembly of Experts said, “In this context, the health and hygiene system in Islamic worldview and ideology not only doesn’t contradict with supplication, reliance and resorting on God and spiritual attention but also spirituality and health are two sides of the same coin of the truth of monotheism.”

RNA – In an exclusive interview with Rasa News Agency, Ayatollah Abbas Ka’bi, the representative of the people of Khuzestan province in the Assembly of Experts, referred to the foreign media’s efforts to spread fear of COVID-19 (Coronavirus) in Iran and create a distinction between health and spirituality and added, “Islam’s view of the progress, science and evolution of time on the basis on Islamic beliefs, values and jurisprudence is a comprehensive view.”

His Eminence added, “In this context, the health and hygiene system in Islamic worldview and ideology not only doesn’t contradict with supplication, reliance and resorting on God and spiritual attention but also spirituality and health are two sides of the same coin of the truth of monotheism.”

He said, “It’s a misguided, ignorant and deviated view of Islamic teachings that some would assume that we can organize the situation only by praying, resorting and paying attention to God without regard to the system of causation, effects, hygiene and treatment.”

Ayatollah Ka’bi said, “On the other hand, it’s a big mistake for people to prohibit supplication, resorting and paying attention to the Purified Imams. Using medicine, treatments and observing the system of health in the shadow of resorting through these means is also means of divine grace and can be achieved in the shadow of supplication and attention to God because everything is in the hands of the eternal power of God.”

Saying that there is no conflict between divine power, resorting and paying attention to the health system, the teacher in the Seminaries of Qom stated, “The lifestyle of Prophet Muhammad, the tradition of the Purified Imams and following these greats have been the tradition of the scholars and the sources of emulation throughout history alongside supplication, mysteries, need, resorting and adherence to medicine and treatment.”

He said, “When the plagues, infectious and contagious diseases occurred, the scholars and the sources of emulation acted in addition to resorting, reciting Ziyarat Ashura and paying attention to the Imam of the Time [Imam al-Mahdi], they formed treatment and assistance groups and used modern science in the field of medicine.”

Ayatollah Ka’bi referred to the false rumour of the opposition of the sources of emulation and scholars to the quarantine of Qom and said, “From the very first days of the emergence of the Coronavirus in Qom, the sources of emulation and scholars were advising the people to observe health and medical instructions and all were in accordance with the instructions and recommendations of the National Headquarters for the Fight Against the Coronavirus.”