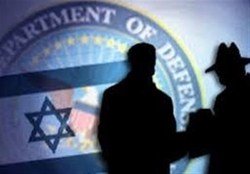 The Israeli military has set up a new "Iran command" amid Tel Aviv's anti-Tehran confrontational rhetoric, according to Israeli media.

RNA - According to The Jerusalem Post, the multiyear "momentum plan" was presented by Israeli chief of staff lieutenant general Aviv Kochavi to all military commanders on Thursday.

The plan, despite awaiting an official approval by the Israeli cabinet, has been endorsed by military affairs minister Naftali Bennett and presented to prime minister Benjamin Netanyahu.

The new "Iran command" will be led by a major general and will seek to "bolster" the "attack capabilities" and "intelligence gathering on the Islamic Republic", including by means of cyber and satellite operations.

The plan will also set up a new "rapid-maneuvering" infantry division to "penetrate enemy territory".

According to the report, the creation of an "Iran command" comes as the Israeli military is worried that its opponents are gradually growing stronger, with the "gap" between them "closing quickly".

Tel Aviv has adopted an open policy of provocative military action against Iran and certain regional states allied with Tehran.

Following the defeat of foreign-backed terrorist groups in Syria and Iraq, Israel has stepped up its military aggression against the two countries in fear of an emerging Iran-led alliance against terrorism and foreign occupation forces.

On Saturday, Bennett said that Tel Aviv and Washington had divided up the fight "against Iran" in Syria and Iraq respectively.

In October, Kochavi said that despite knowing that its enemies are not interested in war, the Israeli military has “increased its pace of preparations” for confrontation.

'Searching for an excuse to level Tel Aviv'

Iran's support, provided chiefly under the command of top Iranian general Qassem Soleimani, had had a major role in empowering Syria and Iraq fight against foreign-backed terrorists and foreign occupation in their countries.

Anti-terror commander, Lt. Gen. Soleimani was assassinated by US forces early January while on an official visit to Iraq at Baghdad International Airport.

According to recent remarks by Major General Mohsen Rezaei, a top IRGC general and the secretary of Iran's Expediency Council, Israel had a direct role in the assassination by informing Washington of Soleimani's flight to Baghdad International Airport.

"We were searching for the Americans to give us an excuse to hit Tel Aviv just as we hit Ain al-Assad," Rezaei said. "We would have leveled Tel Aviv no doubt," he added.

‘Iran to strike US, Israel if slightest error made’

Speaking on Thursday, Chief Commander of the Islamic Revolutionary Guards Corps Major General Hossein Salami responded to Bennett's remarks about dividing roles with the US against Iran.

"We tell them that you are making a mistake, as always," he said, adding that "if you make the slightest error, we will hit both of you".

"We have told them repeatedly; do not rely on the United States, they may not able to help you," he said. "If you want a reliable plan, look towards the sea as it is your final resting place," he added.

The IRGC chief made the remarks during a ceremony marking the 40th day since the assassination of General Soleimani.

During the ceremony, Salami said that Soleimani's efforts had greatly emboldened Palestinian resistance against Israel.

"They have consequently concealed themselves behind walls; Soleimani put the Zionists in prison," he added.

Salami added that Soleimani had defeated Washington's plans for a "new Middle East", noting that due to the general's efforts, a multi-national force has emerged in the region to resist US and Israeli plans.

"General Soleimani generated so much power that if the Zionists only listen slightly next to the their borders, they can hear the languages of Pakistanis, Iranians, Hijazis, Lebanese...," he said.

The IRGC chief lauded Soleimani's legacy of defending "the downtrodden, wherever they were", adding that the "deserts knew him more than the streets".

"The Hindu Kush ranges, the Bamiyan and Panjshir valleys in Afghanistan knew him better than the Afghans," Salami added.

Salami concluded his remarks saying that "the final and ultimate slap will continue until the last American soldier leaves the Muslims land" despite Iran's military retaliation against Washington following the assassination of Soleimani.

Iran fired a volley of ballistic missiles at the Ain al-Asad airbase and another US-occupied outpost in Erbil, the capital of the semi-autonomous Iraqi Kurdistan on January 8, a few days following the assassination.

Despite the Trump administration initially denying any casualties, the Pentagon has since gradually revealed that at least over 100 US soldiers have suffered from "brain injuries" in the operation.

Speaking on Thursday, IRGC spokesman Brigadier General Ramezan Sharif said that Washington has sought to conceal the number of its killed soldiers by using the term "brain injury" to describe casualties.

Sharif added that the assassination of Soleimani and Abu Mahdi al-Muhandis - who was the second-in-command of Iraq's Popular Mobilization Units - "marked the beginning of the end of US presence in the region" and that it will lead to the liberation of Jerusalem al-Quds.