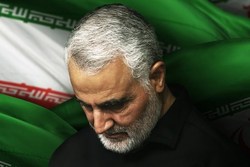 A senior Iraqi legislator said that foreign companies operating at Baghdad airport could have collaborated with the US in the assassination of IRGC Quds Force Commander Lieutenant General Qassem Soleimani and Deputy Commander of Iraq's Popular Mobilization Forces (PMF) Abu Mahdi al-Muhandis.

RNA - "The foreign firms operating at Baghdad airport might have provided the US forces with security information about al-Muhandis and General Soleimani's movement," Mohammad Karim told the Arabic-language website of al-Ma'aloumeh on Thursday.

He added that the foreign firms are informed of the routes and figures who enter Iraq, noting that the Iraqi national security services are gathering information on the incident as it is related to Iraq's sovereignty.

Karim said that results of the investigations could possibly lead to the expulsion of a number of foreign firms active at Baghdad airport, foreign staff or security commanders.

Lieutenant General Soleimani and Abu Muhandis were assassinated in a US drone strike on Baghdad International Airport in Iraq on January 3.

The two were martyred in an American airstrike that targeted their vehicle on the road to the airport.