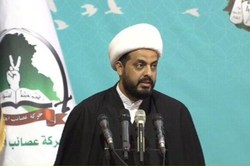 Leader of Asa'ib Ahl al-Haq Resistance Movement Qais Khazali underlined that the group is still planning for military attacks against the American forces in Iraq after the US assassination of two key Iranian and Iraqi commanders.

RNA - "The option of military response to the US forces in Iraq is still on the table," Khazali said in an interview with the Arabic-language al-Ahd news channel on Saturday.

He noted that the administration of US President Donald Trump has crossed all redlines in Iraq and assassination of IRGC Qods Force Commander Lieutenant General Qassem Soleimani and Deputy Commander of Iraq's Popular Mobilization Forces (PMF) Abu Mahdi al-Muhandis was a big crime.

"The resistance groups are at present very powerful quantitatively and qualitatively and the number of our forces has surpassed 10,000 and our missile power, in addition to other equipment, is very high," Khazali said.

The airstrike also martyred al-Muhandis. The two were martyred in an American airstrike that targeted their vehicle on the road to the airport.