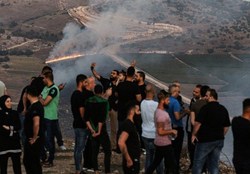 Palestinian protesters have been injured as Israeli forces attacked rallies held in several areas across the occupied West Bank to condemn US President Donald Trump’s plan for the Middle East.

RNA - Palestinian media reported that clashes erupted between the Israeli troops and Palestinian protesters in several areas across the West Bank province of Ramallah and al-Bireh on Friday.

According to the reports, the Israeli forces used tear gas, rubber bullets and live fire to disperse the demonstrators, leaving a number of people injured.

Some of the injured were hit by rubber bullets while the others suffered suffocation due to the inhalation of the tear gas.

Dozens of Palestinians also suffered suffocation in the town of Beit Ummar, northwest of the city of al-Khalil (Hebron), due to the tear gas fired by the Israelis.

Head of Popular Struggle Coordination Committee in Kafr Qaddum Murad Eshtewi noted that the Israeli troops also targeted the journalists in order to hinder them from covering the suppression of the residents of the village who are opposing Trump’s plan which is described as “the deal of the century”.

Dozens of protesters also suffered suffocation during the violent clashes that took place on Friday afternoon in the city of Qalqilya and the town of Azzun.

Meanwhile, Palestinians took to the streets of the besieged Gaza Strip to reiterate their rejection to Trump’s plan.

Trump unveiled the plan alongside Israeli Prime Minister Benjamin Netanyahu at the White House on January 28.

The so-called deal would have, among other contentious things, enshrined Jerusalem al-Quds as “Israel’s undivided capital” and allow the regime to annex settlements in the occupied West Bank and the Jordan Valley.

The announcement of the plan, which all Palestinian groups have unanimously rejected, has given rise to indignation across different countries in the Middle East.