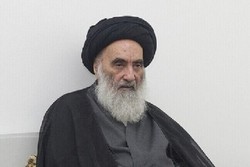 Iraqi President Barham Salih pardoned a person who had insulted the Supreme Religious ‎Authority, based on his authority within the framework of the constitution after the request ‎of the Grand Ayatollah al-Sistani.‎

RNA - After the al-Hillah city court announced that the two-year sentence of the offender to ‎the Authority had been determined and the court did not have the competence to revoke the ‎sentence at the request of the Grand Ayatollah al-Sistani, the office of the Supreme Religious ‎Authority asked the Iraqi Prime Minister to send an request to the President of the country to ‎forgive the convicted person, so that he, according to his authority within the framework of ‎the Constitution, subject the aforesaid person to his amnesty.‎

According to the report, the Office of the Supreme Religious Authority on 14/04/2020 asked ‎the Prime Minister of Iraq to send a letter of recommendation to the President of the country ‎regarding the pardon of this person based on the authorities he has in the Constitution ‎‎(Document No. 3).‎

With the follow-up of the Authority’s office, this letter of recommendation was sent on ‎‎16/04/2020 and on 18/04/2020 the presidential amnesty was issued (Document No. 5). Of ‎course, it should be noted that what is stated in the Prime Minister’s letter of ‎recommendation as well as the presidential amnesty letter that the authority has waived his ‎complaint, is not accurate. Because the Authority has never complained against the person, ‎he now wants to waive his personal right but the complainant faction has been a public ‎right, as stated in Document No. 1, and has been done without informing the Authority.‎

In the Name of God, The Most Compassionate, The Most Merciful

Yesterday, we were informed of the two-year prison sentence of al-Hillah Court on ‎‎12/5/2019 against a citizen named “Kazem Abis Abd” on charges of publishing insulting ‎material to the Supreme Religious Authority, the Grand Ayatollah al-Sistani.‎

Considering that the Grand Ayatollah al-Sistani will never be happy with anyone being ‎punished for publishing an insulting material, we submitted a request to the court for the ‎release of the aforesaid citizen, but it was announced that the sentence has been finalized ‎and the release of the person is not in the authority of judicatory Court.‎

And since, according to Article No. 73 of the constitution, the issuance of a special amnesty ‎for convicts is part of the authorities of the President and is subject to the presentation of a ‎letter of recommendation from the Prime Minister, it is hoped that Your Excellency will send a ‎letter of recommendation to the President regarding the forgiveness of the above mentioned ‎person and his release in the possible nearest time.‎

The office of the Grand Ayatollah al-Sistani

Adel Abdul-Mahdi’s letter of recommendation to President Barham Salih for forgiveness of the ‎above-mentioned person:‎

To the esteemed President,

According to the enclosed images of the final verdict issued by the Criminal Court of al-Hillah ‎against the accused “Kazem Abis Abd” and the text of the Grand Ayatollah Sayyid Ali al-‎Sistani’s waiver from his complaint against this person on 20th Sha’ban 1441 AH coinciding ‎with 14/04/2020, please call for issuing the amnesty for the above-mentioned accused based ‎on the authorities conferred to Your Excellency in Article No. 73 of the 2005 Constitution of ‎the Republic of Iraq.‎

First: The accused “Kazem Abis Abd” should be pardoned from the remaining sentence ‎issued by al-Hillah Criminal Court.‎

Second: The Minister of Justice must implement this order.‎

Third: This decree is effective from the date of issuance.‎