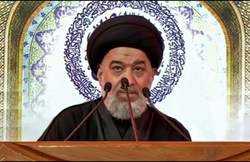 Hujjat al-Islam al-Safi said, “Ayatollah al-Sistani criticized the recent situation in Iraq and said, “Ignoring the recommendations of the religious authority has led to the shedding of the blood of innocent people.”

RNA – During his Friday prayer sermon delivered to a large crowd of believers at the Holy ‎‎‎Shrine of Imam al-Husayn in the Iraqi city of Karbala on behalf of Grand Ayatollah Sayyid Ali al-Sistani, Hujjat al-Islam Sayyid Ahmad al-Safi said, “Despite the repeated recommendations by the religious authority [Ayatollah al-Sistani] on the need to avoid violence, the need to hold peaceful demonstrations and the prevention of popular movements calling for reform to harm popular interests, these issues haven’t prevented the painful and unfortunate events of the past few days that have led to the unjustifiable bloodshed of innocent people, the latest of which was the incidents on Wednesday night in the city of Najaf.”

The representative of Ayatollah al-Sistani said, “The religious authority, as in the past, condemns any form aggression on behalf of any party and offers condolences to the families who lost their loved ones and prays for the healing and health for the injured and the needy.”

Hujjat al-Islam al-Safi added, “The religious authority also emphasizes, as in the past, that official security forces must avoid entering into chaos and the disruption of public order because they are responsible for maintaining security and stability, protecting peaceful demonstrations, protecting public and private property and identifying infiltrators and saboteurs. No sort of shortcoming is allowed in this regard. They must be careful not to resort to violence when applying professional principles in their work.”

The custodian of the Holy Shrine of Abbas ibn Ali said, “In his Friday prayer sermon last week, [Ayatollah al-Sistani] outlined his approach on how Iraq should solve the current crisis and said that the new government must be worthy of public confidence and be able to restore peace and authority to the state.”

Hujjat al-Islam al-Safi also emphasized that the new government must provide for early elections in a secure environment, with no side effects on finances, weapons and foreign interference and said, “[Ayatollah al-Sistani] reiterates that he doesn’t go into any of these matters in detail and doesn’t comment on them.”