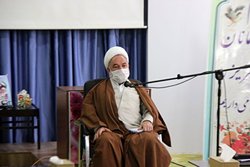 Hujjat al-Islam Yaqoubi said, “We must give a great score to our people because their social, cultural and ‎religious maturity emerged during their struggle against the Coronavirus.”‎

RNA – Speaking at a provincial meeting of the “Movasat” military exercises in North Khorasan province, ‎Hujjat al-Islam Abolqasem Yaqoubi, the representative of the Supreme Leader in North Khorasan province, ‎described the exercises as in line with the response to the call of the Supreme Leader of the Revolution ‎‎[Ayatollah Khamenei] for empathy and faithful support throughout the country.‎

The Friday prayer leader of Bojnourd said that our people have shown great brilliance during the past forty ‎years, adding, “Our people have demonstrated themselves in a good manner throughout all the changes and ‎afflictions. In fact, during the Islamic Revolution, the people became the mouthpiece of Imam Khomeyni and ‎uprooted the oppressive Pahlavi regime, which was a great radiance in the history of Iran and Islam.” ‎

Hujjat al-Islam Yaqoubi continued, “The Iranian people have shown themselves once again in the Holy ‎Defence [Iran-Iraq War] and the hard times of that era. The vigorous defence of our people during the Holy ‎Defence was an unprecedented historical brilliance that demonstrated that these people resists for their ‎religion, country, faith and revolution.”

His Eminence added, “Throughout the history of the revolution, we have had many areas of tribulation and ‎testing, including the Coronavirus, in which our people remained at home with perseverance, resilience, ‎tolerance and obedience to the orders of the government. They obeyed the law of the land and showed ‎great brilliance, including in helping, sympathizing and empathizing with each other.”‎

He said, “During the time that we have inflicted with this virus, we saw good empathy and support from the ‎Iranian people in all scenes so that people from all strata of society somehow demonstrated their help to the ‎needy and the health warriors.”‎

Hujjat al-Islam Yaqoubi added, “When we see issues such as the theft of masks and empty shops in foreign ‎countries, and on the other hand we see the dignity of our nation, we must give a great score to our people ‎because their social, cultural and religious maturity emerged during their struggle against the Coronavirus.”‎