The main duty of missionaries is to interact with non-Muslims

Rasa – Ayatollah Hoseyni-Bushehri spoke at the inauguration of the second Iranian Shi’a Islamic centre in Brazil, the Garden of Muhammad Islamic Centre, via videoconference. 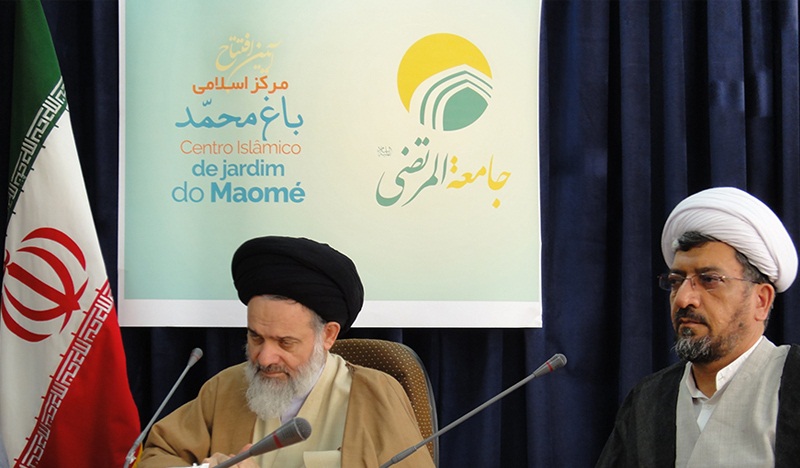 RNA – Speaking via videoconference, Ayatollah Sayyed Hashem Hoseyni-Bushehri, the director of Islamic Seminaries across Iran, participated in the opening ceremony of the Garden of Muhammad Islamic Centre (“Centro Islâmico de jardim do Maomé” in Portuguese) in Brazil on Tuesday morning, wherein he congratulated the Brazilian Shi’a community on the blessed month of Rajab and the birth anniversaries of Imam al-Jawad and Imam Ali and called on the new Islamic centre’s officials to ensure the appropriate and necessary measures.

His Eminence praised the efforts of Qom’s al-Murtadha University, which helped establish the Islamic centre, for providing missionaries with necessary Portuguese-language training and also for creating an atmosphere to send missionaries to countries where there is an interest in Islam, saying these efforts are worthy of appreciation and thanks.

The source of emulation stated that Brazil is an important country and the establishment of the Garden of Muhammad Islamic Centre in the South American country is a considerable achievement. “The officials the al-Murtadha Institute and the benefactors have played a key role in establishing this foundation,” he said.

Ayatollah Hoseyni-Bushehri called on the missionaries at the newly established Islamic centre to explain the emotional dimensions of Islam during the various occasions and commemorations of the martyrdoms of the Imams, but not to limit their programs to the local Muslim community and to strive to establish communications with non-Muslims in order to explain the concepts of Islam and Ahlul-Bayt to them on the basis of Islamic logic in speech, writing, and contemporary tools in various fields and to not ride the wave of emotion but rather, to be active in Islamic propagation through rationality.

Qom’s Friday prayer leader said in a world where people are not familiar with Islam, the emotional component of Islam should be explained but in the world that requires Islamic-based reasoning and logic, we should strive to incorporate these values in our writings, translations and lectures speakers to suit the prevailing conditions in the region and the world.

“We must strive to remove the unfavourable view of Islam and anti-Islamic sediments in the world and demonstrate the radiant face of Islam. God-willing, the opening of this centre is a prelude to greater activities,” Ayatollah Hoseyni-Bushehri stressed.

Tags: Ayatollah Hoseyni-Bushehri Garden of Muhammad Islamic Centre Shia Brazil Interfaith
Short Link rasanews.ir/20015a
Share
0
Please type in your comments in English.
The comments that contain insults or libel to individuals, ethnicities, or contradictions with the laws of the country and religious teachings will not be disclosed