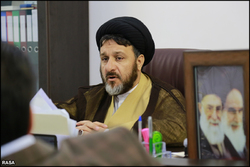 The teacher of advance courses in Islamic Jurisprudence, mentioning that the flood victims should be helped in Ramadan month, stressed that a highly rewarded action for the Ramadan month is helping the disaster-stricken people and the needy.

RNA - The teacher of advance courses in Islamic Jurisprudence, mentioning that the flood victims should be helped in Ramadan month, stressed that a highly rewarded action for the Ramadan month is helping the disaster-stricken people and the needy.

Hujjat al-Islam Sayyed Jalal Razavi Mehr, the teacher of advance courses in Islamic Jurisprudence at Qom Seminary, pointing to the arrival of Ramadan month, stated, “As mentioned by the holy Quran, fasting is a duty in all religions, and Ramadan is a highly important month among the heavenly months in all religions”.

“Ramadan is the month providing the special people, who with love conduct their heavenly duties, with a heavenly feast. Ramadan and the Nights of Decree can provide the happiness of the present world and the World to Come for the man”, he added.

Saying that the current conditions of the country shouldn’t be forgotten in Ramadan month, he mentioned, “we shouldn’t forget the flood victims, as the true faster is the one who has always those in hardship in his mind”.

The chairman of Noor Iman Cultural Institute continued, “Thirst and hunger of Ramadan month remind us of the early days of Islam passed in Abi Taleb Shi’b and the cruelty of the oppressing regimes, and thus it bolsters our resistance against the ambitions of the enemies”.

He finally pointed out, “reciting Quran and praying are among the best can be done in this month, however helping the needy and the patient can be the source of individual and societal blessings”.

Satan is shackled and chained during the month of Ramadan

Some advise for Muslims in the month of Rmadan

The fight against the enemies shouldn't be stopped