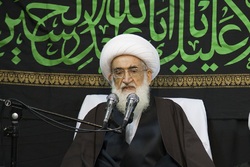 Hazrat Ayatollah Noori Hamedani said that the abundance of legal cases isn’t seemly for the Muslim society and then stressed, the processing of the cases should be accelerated.

He said, “The first one is the issue of government and leadership. It is different from solely providing guidance, as the leader is responsible for moving and directing the society. The leader should always be present in the society, and the leader in a Muslim society is the Guardian of the Islamic Jurist (Wilayat Faqih)”.

He then said, “The second case is following the sources of emulation, and those who have not reached the degree of Ijtihad, should do the Heavenly rules following the experts and jurisprudents”

He described the Justice a haven for the people and then said, “Fortunately, the leader appointed you to this highly sensitive position, and you, having gained experiences in different positions during the revolution, are capable of doing this task and will be successful”.

He finally stressed the prevention from the commitment of the crimes, and added, “some steps should be taken so that there will be no ground for the commitment of crimes. People should experience the taste of the right judgement in your presence”.

Who is Trump to declare the IRGC a terrorist organization?

Don’t trust the US and Europe

By supporting terrorist acts, the West seeks to prevent the spread of Islam in the world

We must not allow Western culture to penetrate through education programs

With their epic presence in 22 Bahman rallies, the Iranian people defeated the summit in Poland