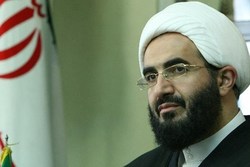 Tehran's provisional Friday Prayers Leader Ayatollah Mohammad Javad Hajaliakbari described the US withdrawal of troops from Syria as significant, and highlighted that Washington’s military presence in the region brought nothing but catastrophe for the Middle East.

RNA - The Friday Prayers Leader said that the resistance of the Iranian nation turned the Middle East into a graveyard of United States’ aspiration.

Mohammad Javad Hajaliakbari said that US forces' withdrawal from Syria is not insignificant, adding, “of course, one should be cautious about their other conspiracies.”

He also pointed to the sneaky visit of US President Donald Trump to Iraq and noted that Iraqi people and officials didn’t welcome him and isolated the aggressive country.

The senior cleric wished that all US forces would exit the region in the near future, highlighting, “Presence of Americans in the region brings nothing but misery.”

Elsewhere in his remarks, he said that Hezbollah and nations of Syria, Iraq, and Bahrain have formed a golden chain of resistance in the region, and that Israeli regime is experiencing very tough days.

In mid-December, US President Donald Trump said the US forces would be pulled out from Syria since the ISIL terror group had been defeated there.

In Russia, Kremlin Spokesman Dmitry Peskov said that the presence of the US forces in Syria does not help the political and diplomatic settlement of the crisis in the Middle Eastern country.

"The presence of the US forces on the Syrian soil does not help reach the political and diplomatic settlement. Of course, the involvement of Washington in the relevant talks under the UN bumbershoot, the harmonious work of the US officials with (UN Envoy for Syria Staffan) de Mistura in the interests of this settlement would contribute to reaching this final goal," Peskov told Russia’s Channel One.

According to Fars News Agancy, the Kremlin spokesman recalled that the US presence in Syria was in violation of international law, adding that in some areas under the US control, there was a humanitarian catastrophe and terrorists were being equipped with weapons.

In relevant remarks on December 24, Iran's Judiciary Chief Sadeq Amoli Larijani underlined that the US had been forced to pull its forces out of Syria, adding that annihilation of the ISIL was the result of the Syrian people and government's resistance and their allies' support.

"The US withdrawal is actually escaping forward and today, they are leaving Syria with this claim that they have defeated the ISIL, while the entire world knows that the Syrian people's victory and defeat of the ISIL was the result of the Syrian people and its legal government's resistance and the Islamic Republic's support for the resistance front," Amoli Larijani said, addressing the judiciary officials in Tehran on Monday.

He added that irrespective of the US claims for its pullout from Syria, the world people knew the reality very well.