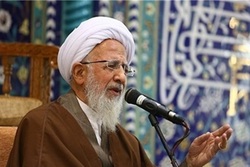 Hazrat Ayatollah Javadi Amoli, stressing that the chance for development is provided, said, “The existing enemies, sanctions and etc. should never be employed as pretexts, as we are capable”.

RNA - Ayatollah Javadi Amoli, visited by the Chief of Justice, stated, “Though there are many problems and incidences, there is a brilliant expression in Quran expressing that the number of problems is never equal to the easy affairs’, and God also mentions that hardships are followed by eases”.

He then said, “From the victory of the Islamic Revolution and the formation of the Justice, it was mentioned that the Islamic Justice system would be maintained by two principles, “free law” and “liberal judge”.

Pointing to the need for the review of some laws, Ayatollah Javadi Amoli reiterated, “The section of jurisprudence in the book of religion mentions that the Muslim rulers should reimburse the debts of the innocent bankrupt ones, and if there are no resources specified to this end, some arrangements should be made so that the said ones aren’t imprisoned”.

Providing some recommendations to the Justice, he stated, “firstly, people should get acquainted with the laws and the public culture should be promoted in terms judicial issues. Secondly, some acquire knowledge to commit sins, and such sins are committed with the help of the lawyers who know the legal gaps, thereby the Justice should determine such people and prevent from the abuses of the legal gaps”.