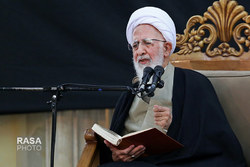 Hazrat Ayatollah Javdi Amoli pointed to the view of revelation-based reasonability on the science, and stressed that the religious science is the one on a heavenly deed.

RNA - Hazrat Ayatollah Javadi, in a video message to the national conference on “Theory of the Islamic Science and Its Application in the Education System”, held in Ghadir conference hall of Qom Seminary’s Office of Islamic Propagation, stated, Imam Sajad, through a narrative, attempted to set the prophet a source of direction for us”.

He added, “Each step taken in this regard will be rewarded and differences here are a blessing; each different view fills a gap and leads to the advancement of another one”.

Ayatollah Javadi Amoli finally reiterated, “When different views are expressed, the deficiencies will be resolved, and we hope God may reward you for whatever attempt you made”.