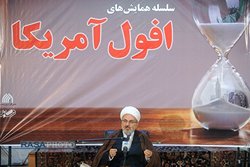 RNA – Speaking at the first part in a series of conferences entitled “The Decline of the United ‎States of America” which was held at Hazrat Zaynab Mosque in Pardisan, Qom, Hujjat al-‎Islam Ahmad Moradkhani referred to the divine traditions and the decline of American power ‎and said, “I call divine traditions ‘the behaviour analysis of God’ – that is, how does God deal ‎with human societies? Behaviours that are performed in a continuous manner are referred to ‎as tradition.”‎
‎ ‎
The member of the faculty at Imam Khomeyni Specialized University said, “The traditions ‎that are discussed in the context of the decline of the United States are referred to as ‎‎‘graduality’ and isn’t specific to the Americans but rather any group of people who choose ‎such a path, the same results will be achieved and God will do such a thing.”‎
‎ ‎
He stated that we have to study the history of the people of the past and said, “We must ‎study the history of the people of the past ‎and take lessons from them so that we don’t ‎suffer the same problems that they suffered from and there are many verses in this regard ‎as well.”‎
‎ ‎
Hujjat al-Islam Moradkhani ‎said, “All human beings, even the disbelievers, are protected by ‎God, and their life is in the hands of God. Therefore, God says ‘if I send down a punishment, ‎no one can prevent it.’ God has sent the Prophet Muhammad and proof but the disbelievers ‎deny it. Therefore, He will punish them.”‎

His Eminence said, “This subject manner mentioned isn’t specific to the United States, Saudi ‎Arabia and Israel. The Supreme Leader of the Islamic Revolution [Ayatollah Khamenei], who ‎is educated in the verses of the Holy Quran and in the science of hadith, says they will ‎Decline.”‎
‎ ‎
He stressed, “The evidence of the decline in the United States is abundant. According to ‎statistics, the United States has been in decline since 2017 and the Supreme Leader said, ‎‎‘When I speak of the decline of the soft power of the United States, which is the same as ‎that which is witnessed today, I mean that if the soft power is destroyed, hard power won’t ‎be able to function properly. In the case of the Soviet Union, the destruction of soft power ‎was followed by the destruction of hard power.”‎

Hujjat al-Islam Moradkhani ‎said the United States has allocated the largest part of its budget ‎to military affairs and said, “Some say the United States has declined in several areas. First ‎of all, an individual like Donald Trump became the president of the United States. Besides ‎this, economic problems, budget deficits, social problems, military spending, poverty, ‎increased theft and the weakening of liberal ideals are all considered as the signs of the ‎decline of the soft power of the United States.”‎
‎ ‎
He continued, “Some people like the West, and it’s no different in Iran or in another country. ‎Therefore, we must know if such thoughts exist, the statements that have been expressed in ‎regard to the United States being in decline are being implemented in Iran. The Holy Quran ‎says ‘you will achieve power if you promote the truth’ but the implementation of treaties like ‎the 2030 Agenda for Sustainable Development are in opposition to this.”‎
‎ ‎
Hujjat al-Islam Moradkhani ‎said, “Some influential managers who are trying to play the ‎people’s minds question economic security, saying that many problems are not due to ‎mismanagement but are as intended to be and they are eagerly waiting to implement the ‎‎2030 Agenda, while the implementation of the 2030 Agenda means the decline of the Islamic ‎system. Our country needs managers and authorities who accept Islam.”‎

It is worth mentioning that the series of conferences on the decline of the United States has ‎been organized by Rasa News Agency and is founded on three axes – economic decline, ‎military decline and political decline, which have been neglected by the public.‎