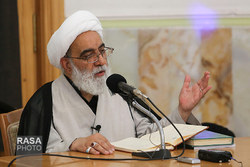 The member of Qom Seminary’s Society of Teachers stressed the use of opportunities and said that the months of Rajab, Shaaban and Ramadan offer a chance for the spiritual promotion, and the man should seize it.

RNA - Ayatollah Muhammad Mehdi Shabzendehdar, the jurisprudent member of the Guardian Council, in his ethics course, mentioning that ethics has some diverse rules, said, “Observing the moral rules is not simple, and it requires the heavenly aids”.

He added, “Some moral virtues are presented to the man by God, and some should be acquired, thus they require the man to make attempts in this regard; and abiding by the said rules plays a significant part in the development of the man”.

Saying that the months of Rajab, Shaaban and Ramadan offer a good opportunity for the spiritual promotion, Ayatollah Shabzendehdar stated, “much crying before God is what recommended by Imam Ali, and crying for Heavenly forgiveness in the said months purifies the heart and the soul”.

He finally said, “the man should do his best on the path of religion, and the seminary members, similarly, should be treated as mentioned, and observe the behavioural rules, say their prayer, and fast and pay alms”.

Satan is shackled and chained during the month of Ramadan

Some advise for Muslims in the month of Rmadan

The representative of grand Ayatollah Sistani:

Politicians must set aside their disputes