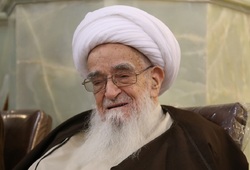 Ayatollah Safi Golpaygani stressed that mosques have played a fundamental and prominent role in the Muslim society since the advent of Islam, and Shiite scholars have directed people from this fort.

RNA - Ayatollah Safi Golpaygani, visited by Hujjat al-Islam Noorizadeh, the chairman of the Center for Administration of Mosque Affairs, thanked him and his colleagues and said, “What you do is much important and critical that should be done honestly and diligently as a religious task. I hope you can function successfully protecting the Islamic targets, enjoining good and forbidding the wrong and maintaining the high position of mosques.”

Pointing to the important position of mosques in Islam, he stated, “From the advent of Islam to now, mosques have played a fundamental and prominent role in the Muslim society and the Shiite scholars have directed people from this fort, and all the programs on the protection of the religion have originated from mosques.”

Ayatollah Golpaygani stressed, “The more diligently prayer leaders use this fort expressing the illuminating teachings and instructions of Ahl al-Bayt (AS) and religious rules, the better they act in conducting their tasks.”