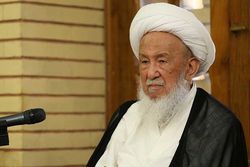 A source of emulation, based in Najaf Ashraf pointed out that the missionary should be the voice of the oppressed.

RNA - Ayatollah Sheikh Muhammad Ishaq Fayyaz, a source of emulation based in Najaf, through a message read by Hujjat al-Islam Sheikh Raid ad-Dayravi, addressing the second annual conference of the Iraqi missionary and [Friday] prayer leaders held in Kufa University, stressing the need for keeping away from extremism, maintained, “Missionaries should bolster the foundations of belief in their audience and be the voice of the oppressed and the poor.”

He added, “Paying the proper attention to Quran, the tradition of the prophet (S) and the religious rules and orders are highly significant that should be diligently covered by the missionary.”