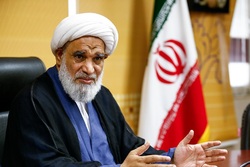 The member of the presiding board of the Assembly of Experts called the recent crime of the House of Saud a sign of desperation, as the House of Saud is at the end of the line and then, he called for the resistance of the Islamic nations.

RNA - The member of the presiding board of the Assembly of Experts, talking to RNA in Ahwaz, pointed to the appalling crime of martyring 33 Saudi Shiites by the House of Saud, and stated, “The House of Saud is a partner of the US, and its recent crime was added to its previous crimes and cruelties.”

The Heavenly hand of retaliation will make House of Saud remorseful

The member of the presiding board of the Assembly of Experts, mentioning that the crimes of House of Saud are done with the supports of the US and the Zionist Regime, said, “Such crimes are the sign of their desperation, and the Heavenly hand of retaliations will bring them remorse and regret.”

Saying that the unity of the Saudi people will generate a popular movement against the House of Saud and retaliation of the blood of the martyrs, reiterated, “The said recent crime is a war against God, his prophet, and corruption in the land, carried out in the silence of the so-called human rights organizations. The House of Saud conducting these appalling crimes ridicules such organizations. However, these crimes makes the nations united against such oppressions and cruelties.”