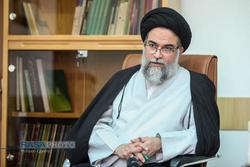 Hujjat al-Islam Madani, saying that international propagation should be done peacefully, mentioned that the international missionaries should act as the messengers of kindness.

RNA - Hujjat al-Islam Sayyed Mahmood Madani, in the meeting of the international missionaries of Jamia az-Zahra (S), held in Shahid Beheshti building, opened his speech reciting the verse no. 39 of Ahzab Sura, “[ Allah praises] those who convey the messages of Allah and fear Him and do not fear anyone but Allah . And sufficient is Allah as Accountant.”

His speech included the following themes and parts:

The president of Jamia az-Zahra added, “We managed to prepare the grounds for working of the female missionaries, and this seminar is a step in this regard.

We are not to solely treat missionaries, but we should also enter the field of sending missionaries

In the policy-making council and board of trustees we announced that we should send missionaries to teach people across the country.

Hujjat al-Islam Madani said, the missionaries should talk to their audience through an understandable language so that the young generation and the target of the mission understands their message simply and clearly.

The missionaries should acquire skills continuously

Hujjat al-Islam Madani said, “in order to impact the society, the missionaries should always continue acquiring new skills. The skills meant here is the speaking skill, or talking simply and effectively to the audience.”

Missionaries should propagate the Heavenly books and word

Hujjt al-Islam Madani stressed, “We should propagate Quran, tradition and the words of Ahl al-Bayt (AS), and the words and works of the scholars.”

The president of Jamia az-Zahara reiterated, “A missionary or a speaker can change the direction of a man and even a word has this influence.”

He then said, “The international propagation should be conducted peacefully and kindly, the missionary should act as the messengers of the kindness, avoid the disputes and focus on the common grounds.”

He finally stressed, “Your Chador is a propagation and people regard you as a lady, member of Jamia az-Zahra, they know us as the criteria, and in case of acting wrongly, we should be responsible before God.”