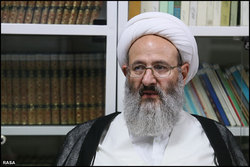 The member of the society of teachers of Qom seminary said that without criticism no one is purified and in my opinion, clerics should criticize themselves before others.

RNA - Ayatollah Mohsen Faqihi, a teacher of Qom Seminary, talking to Rasa News Agency, pointed to the words of the supreme leader of the revolution on the unbreakable links between the people and clerics, and said, “Clerics should recognize their own position, people used to much refer to the clerics in order to find the best remedies to their maladies, yet it is done less nowadays.”

Stressing that the close ties between the people and the clerics should be renovated, he added, “Some clergies have positions inside the government or system, and it has cut some of their links with people, as people can meet the governmental clergies with difficulties, though there are many clergies in mosques and answer the queries of the people.”

Ayatollah Faqihi, saying that people still have trust and belief in the clerics, stated, “That some people criticise the clerics is a positive point; without criticism, the man loses the chance of purification, and in my opinion, we clerics should criticise ourselves before people. Some clergies may take wrong steps, and it is not what people expect the clergies, and thus criticism could correct such mistakes.”