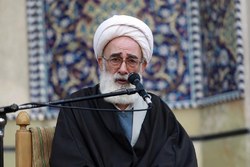 The teacher of Qom Seminary, elaborating on the need for taking lessons of the past and the dead, quoting Imam Ali (A), stressed that such lessons illuminate like a light inside the man.

RNA - Hujjat al-Islam Nazari Monfared, the teacher of Qom Seminary, in a session held in Imam Hassan Askari (A), explaining the parts of the letter no. 31 of Nahj al-Balagheh, stated, “Due to the Heavenly wisdom, the man can take lessons from the past and the dead. Lusts turn off the light of taking lessons, though Quran orders that the holders of wisdom should take lessons, both from your own past, and those lived before you.”

He continued, “Imam Ali (A) also asks his children to take lessons from the past. The present world is the path to the World to come. Take lessons from those who lived in the world, but left this world and whatever they had in it.”

Finally he said, “If the man continuously reminds himself of death, he will follow the codes of ethics and it will prepare him for traveling to the Other world. Death will happen to all residents of this world, and it is an irrevocable rule”.