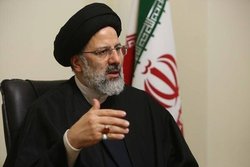 The Chief of Justice, saying that we can conquer the enemy using an iron will, mentioned,"The best way to achieve victory is resistance, and not negotiation or surrender."

RNA - Hujjat al-Islam Ibrahim Raeesi, in the session held with the top judicial officials, described the month of Ramadan the month of worshiping, attaining spirituality, self-preparation and attention to the Heaven and then said, “the man is shouldered with some obligations in this month, they all are to bolster his piety and to protect him against the strikes of the devils and to strengthen him for facing the lusts and problems.”

The chief of Justice said, “Ramadan is the best opportunity for bolstering our will. The victory of the Iranian nation depends on Resistance and self-confidence. Victory will be attained only through resistance, and not via negotiation or surrender.”

Hujjat al-Islam Raeesi said, “The activists will exit the battlefield victoriously. Now all should work hard and passivity will be accepted under no pretext.”

Finally, he said, “All the branches of the system have enough authorities. Improving the life quality of the people is the first priority, and all the related parts and officials should do their part in this regard.”