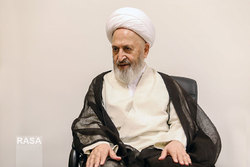 Ayatollah Sobhani, pointing to the plundering of the poor countries by the US, said that if the oppressors stop interference in other states’ affairs, no war or struggle will occur.

RNA - Ayatollah Jafar Sobhani, a source of emulation, in his seventh session on Quran interpretation, held in Hujjatia Seminary, interpreted the verse no. 51 of Tawba Surah and said, the true believers always argue that there is no loss and damages on the Jihad path towards God. If they are killed, they will attain bliss in the Other World, and if they are not killed, they will life a blissful life.

Pointing to the verse no. 52 of Tawba Surah, he pointed out, “What is done hypocritically won’t be accepted by God. Jihad should be done honestly. The man should step for attaining the satisfaction of God with honesty, and hypocritical deeds won’t have any effect”.

Pointing to the plundering of the poor countries by the US, Ayatollah Sobhani stressed, “Tha US and some other roobing countries plunder the mines and resources of the poor counties in return of providing them with some insignificant aids. Such steps are baser that hypocrisy, as they hinder the development of such countries.”

Finally, Ayatollah Sobhani said, “if these countries stop making interferences in the affairs of other countries, no more war or struggle will be launched. West and East interfere with the underdeveloped states; they should quit their meddlesome actions; the countries located in the far end of the world should abstain from such troublesome steps.”