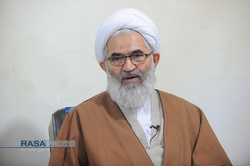 The member of the Assembly of Experts, saying that some heads of the Muslim countries act contrary to the instructions of the holy Quran, mentioned that the true follower of Quran never bows down to the enemy.

RNA - Hujjat al-Islam Ali Moallemi, the member of the Assembly of Experts, in his course of Quran interpretation, held in Qaimshahr, called Quran as he light guiding the people in the history, and then added, “Performing the instructions of Quran will bring the man a blissful and happy life.”

Saying that the culture of Quran is the foundation of resistance, he added, “Quran is the document of the identity of the Muslim nation, and today, the great Iranian nation is standing against the plots and hostilities relying on its Quranic treatment and culture.”

Saying that Quran has been the key of the survival of the Muslim society in the history, Hujjat al-Islam Moallemi pointed out, “Unfortunately, the heads of some Muslim countries are bowing down to the oppression and cruelty instead of standing against them, and it is against the instructions of Quran, the true follower of Quran never does so.”

The member of the Assembly of Experts said, “Aberration of the Muslim society from the Quranic path has taken it to the satanic roads.”

Stressing that the society suffers from the lack of deep understanding and not performing the instructions of Quran, the Friday prayer leader of Qaimshahr said, “If understanding the content of Quran is combined with performing its instructions, it will provide us with happiness and bliss of the present and Other world.”

Finally, saying that all parts of the Muslim society should follow the Quranic ideals, Hujjat al-Islam Moallemi mentioned, “Performing the instructions of Quran acts like a ladder taking the man to the higher levels of development and growth.”