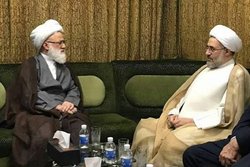 The secretary general of the World Forum for Proximity of Islamic Schools of Thought met Ayatollah Yaqubi.

RNA - Ayatollah Sheikh Mohsen Araki, the chairman of the World Forum for Proximity of Islamic Schools of Thought and member of the assembly of experts, met Ayatollah Sheikh Mujammad Yaqubi, a source of emulation, based in Najaf.

In the course of the visiti, Ayatollah Yaqubi pointed to the part played by the sources of emulation in maintenance of an original Islam and drawing a straight path against different threats, and then said, “Advances of technology and mass communication tools have given Islam a louder voice.”

Ayatollah Araki also appreciated the supports of Ayatollah Yaqubi for the Islamic and intellectual movements founded by Imam Khomeini, Shahid Sadr and other sources of emulation, and then reiterated, “They could wisely and patiently modify many equations within the fields of Islamic Jihad and practice.”

Stressing the need for expansion of the scientific and intellectual communications between Qom and Najaf seminaries, especially in the fields of Jurisprudential activities, he said, “The Jurisprudence Centre of the system has published a book titled “the Jurisprudence of the Political System” in three volumes and in Arabic.”