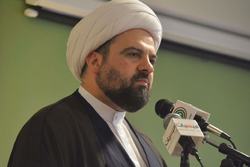 The Friday prayer leader of al-Brajneh of Lebanon said that the US attempts to plunder the wealth of Arab countries and Iran through launching a war between them.

RNA - The Mufti of the Lebanese Shiites, Hujjat al-islam Sheikh Ahmad Qabalan, in the sermons of the Friday prayer, held in Imam Hussain mosque of al-Brajneh area, saying that the US is trying to generate the new Middle East, mentioned that the US is attempting to strike a war between Arab countries and Iran in order to plunder their wealth.

Saying that the US and the Zionist Regime regard the friendship and support of Iran and its leader to the Palestinian people as a big threat to themselves, he mentioned, “The Palestinian people, especially those in Gaza Strip, are in the front line of the combat against the enemy, and Israel is attempting to normalise its links with Arab countries and converting them to its allies and friends.”

He finally called for providing the Palestinian nation with helps and stated, “We are religiously and morally required to back up Palestine and take no step for the security of Israel.”