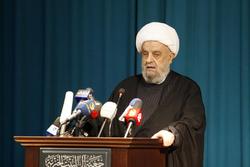 Ayatollah Qabalan stated, “Neutrality in the logic of Prophet Muhammad and Prophet Jesus ‎means the desire for the rights and in defence of the country against the sword of economic ‎sanctions.”‎

RNA – In a statement issued on the occasion of the fourteenth anniversary of the victory of ‎the Islamic Resistance [Hezbollah] in the 2006 33-Day War [July War], Ayatollah Abdul-Amir ‎Qabalan, the deputy head of the Supreme Islamic Shi’ah Council of Lebanon, said, “We ‎appreciate and thank those who brought us this victory. This victory brought honour and ‎dignity to Lebanon.”‎

The senior Lebanese Shi’ah scholar stated, “Anyone who destroys the face of Lebanon and ‎the Islamic Resistance in any way for the occupier regime and steals national interests is ‎a traitor. We thank the Islamic Resistance, the army, the people and the brave people who ‎brought about this victory with their sacrifices, courage and patriotism.”‎

Ayatollah Qabalan added, “The martyrs who sacrificed their lives have joined the ranks of the ‎prophets who were immortalized by history and our land has witnessed their heroism and ‎they were and still are a model of nobility, magnanimity and redemption.”‎

His Eminence said, “Neutrality in the logic of Prophet Muhammad and Prophet Jesus Christ ‎means the desire for the rights and defence of a country that is facing economic sanctions. ‎Neutrality means being in the position as a saviour for the country, committing to the ‎religion and the oppressed people and thanking those who gave their lives for this land.”‎

He said, “It’s in the logic of Prophet Muhammad and Prophet Jesus Christ that we’re required ‎to take bitter decisions in the face of the tyrants regarding local, regional and international ‎projects who cooperate to exhaust the poor in Lebanon. Neutrality means being against the ‎devils, corruption and oppression.”‎