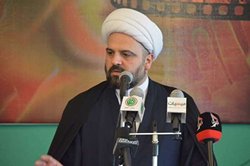 Rasa – The Lebanese Shi’ah scholar stressed Lebanon’s support for Iran in any possible war ‎by the United States against Iran and warned, “Arab leaders must be careful not to fall into ‎the United States’ traps.”‎

RNA – In his Friday prayer sermon to a large and fervent crowd of believers at the Imam al-‎Husayn Mosque in Burj al-Barajneh‎, Lebanon,‎ Hujjat al-Islam Ahmad Qabalan, the leader of ‎the Shi’ah Muslims of Lebanon, referred to repeated threats from the United States and its ‎allies against the Islamic Republic of Iran and said, “The threats to Iran aren’t just threats to ‎a country but a threat to the entire region and its people. The enemies have drafted a plot ‎against all the people of the region.”‎

His Eminence described the proposed “Deal of the Century” peace-plan by Donald Trump, ‎the President of the United States, as “new and dangerous” and added, “The leaders and ‎heads of states in the Middle East must examine their sense of rationality and choose the ‎path and logic of wisdom‎ instead of the logic of war and hostility because if there is a war, ‎no one will benefit from it except Israel.”‎
‎ ‎
Hujjat al-Islam Qabalan reiterated, “Iran isn’t a weak country and a simple morsel for ‎anyone and it will never retreat from the rights and dignity of its people. We stand alongside ‎this country and back its positions in support of the oppressed and weak people.”‎
‎ ‎
He warned Arab countries that they must be careful about Washington’s traps, saying, “Arab ‎leaders must be careful not to fall into the United States’ traps and that they must adopt a ‎historic position and defend the people, government and their dignity and block all of the ‎ways that the United States and the Zionist regime are using to implement their plans.”‎
‎ ‎
It’s worth noting that on Thursday, May 23rd, two American media outlets separately issued ‎reports on Donald Trump’s attempts to distance himself from a military conflict with Iran, ‎saying that he was unhappy with the arbitrary efforts of some of his advisers to imply that ‎the United States was on the verge of a military conflict with Iran. ‎

CNN, citing a number of informed sources wrote that Trump believes that massive military ‎intervention in Iran would be politically devastating for him.‎
‎ ‎
The Washington Post also quoted several American officials as saying that Trump will prefer ‎a diplomatic approach to resolving tensions and has called for direct talks with Iranian ‎leaders.‎