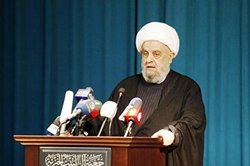 Rasa – The deputy head of the Supreme Islamic Shi’ah Council of Lebanon described Israel ‎as the “spawn of Satan,” and stressed that Jerusalem al-Quds will be liberated soon.‎

RNA – Speaking to the occasion of International al-Quds Day, Ayatollah Abdul-Amir Qabalan, ‎the deputy head of the Supreme Islamic Shi’ah Council of Lebanon, said, “Imam Khomeyni ‎named the last Friday of the holy month of Ramadhan as International al-Quds Day in order ‎to emphasize the faith identity of Jerusalem al-Quds, the city which the messengers and the ‎prophets designated and the city which the warriors and martyrs strived to protect with great ‎sacrifices in order that it would remain as a heavenly city on earth and gave it the titles of ‎truth and faith.”‎

The senior Lebanese Shi’ah scholar conveyed his greetings to all of the personalities who ‎initiated the awakening of the Islamic ummah for the salvation of Jerusalem al-Quds, ‎especially Imam Khomeyni, Imam Musa al-Sadr, Yaser Arafat, Archbishop Hilarion Capucci, ‎Shaykh Ahmad Yasin and all the warriors and said, “These good people have kept alive the ‎hope of the liberation of Jerusalem al-Quds in their hearts and stated that the right would ‎never be lost and Jerusalem al-Quds ‎is the one-way path that begins with martyrdom and ‎ends with victory.”‎
‎ ‎
Ayatollah Qabalan forbade any interaction with Israel and said, “Again, we emphasize that ‎Israel is the spawn of Satan and therefore, it’s forbidden to make contact with it. The Zionist ‎occupying regime is an absolute evil regime that doesn’t understand any language except the ‎language of killing and hostility. Therefore, the only way to liberate Palestine, its sanctities ‎and its people is to resist.”‎
‎ ‎
He described the Palestinian people as brave and patient, and said, “Soon victory will be ‎granted to the rightful party by the permission of God Almighty and God is the helper of ‎those on the right path and its followers. As long as the people of Palestine insist on their ‎rights and unite, the issue of Palestine will not be forgotten and the failure of the ‘Deal of the ‎Century,’ which will lead to the sale of Palestine, will be defeated.”‎

Ayatollah Qabalan ‎invited all Arab, Islamic and Christian countries to engage in solidarity with ‎the Palestinian people and said, “By holding demonstrations and gatherings, they can ‎support this country and condemn any normalization of relations with the Zionist regime.”‎

Israeli Occupation and the Way Ahead