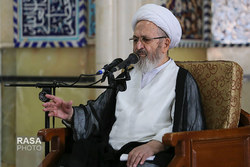 RNA - Ayatollah Jafar Sobhani, in a course of Quran interpretation held in Hujjatia Seminary, interpreting the verse no. 40 of Tawba Surah, said, “The question may raise is that if God helped his prophets, how could some of them be killed by their enemies? The response to this question is that a dimension of the Heavenly victory is that the prophets all attained victory in occurred combats, and another aspect of the Heavenly victory is that God bolsters the logics of the prophets so that it penetrates into all parts of the world.”

He stressed, “Using different means and tools, infidels much attempted and planned to kill the prophet of Islam (S); but the prophet became informed of their plans by Gabriel, and their plans and attempts were all frustrated.”

Finally, the prominent teacher of the seminary, stressing that the enemies attempt to undermine the religious principles, pointed out, “Unfortunately, today the Satan are present in the cyberspace and distribute their words and views, the officials shouldn’t let the devils abuse this space and their plans should be frustrated.”