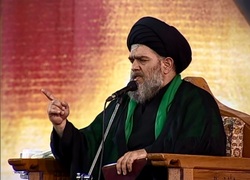 The speaker of the shrine of Lady Masumah (S) pointed to the health as a demand of the hearts of the believers in the month of Ramadan and said that nowadays a cultural massacre is happening in the cyber space.

RNA - Hujjat al-Isalm Sayyed Hussain Momeni, presenting a speech in a ceremony held in the holy shrine of Hazrat Masooma (S), elaborated on the significance of the month of Ramadan and then stated, “Ramadan is the month of patience and mercy.”

The speaker of the holy shrine of Hazrat Masooma, describing praying and asking for being forgiven as the best deeds done in the month of Ramadan stated, “Praying is not solely asking. It is leaning upon God, and the pinnacle of praying is asking before God.”

He added, “The month of Ramadan is the month in which the believers ask God for their wants. Let’s ask him as we all know our demands will be accepted.”

He added, “Actions done by some users on the virtual space have undermined the social security. Therefore the believers should act diligently confronting such issues.”

Hujjat al-Islam Momeni pointed to the health as a demand of the heart of the believers and then stated, “Today the cultural strikes have been turned into cultural massacre on the cyberspace.”