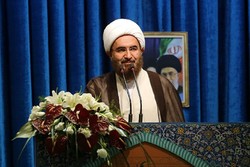 Tehran's provisional Friday Prayers leader Hojjat al-Islam Mohammad Javad Haj Ali Akbari called on the European states to do their best to fulfil their commitments under the nuclear deal with Iran, also known as Joint Comprehensive Plan of Action (JCPOA).

RNA - Addressing a large and fervent congregation of the people in Tehran on Friday, Hojjatoleslam Haj Ali Akbari said, "The global community and the Europeans are now at a big test."

Hojjatoleslam Haj Ali Akbari reiterated that it will not be in favor of Europeans if they do not pay attention to the deadline set by Iran for them.

"Our move (to reduce commitments to JCPOA) was perfectly legal, and it was done based on articles 26 and 36 of the JCPOA which allow the country to walk away from some of its obligations if other signatories do not stick to the deal," he added.

Hojjatoleslam Haj Ali Akbari underlined that Tehran's declaration was not a spontaneous measure, and said, "Iran decided to rightfully walk away from some of its JCPOA commitments to show its firm stance against the US hostile actions."

He, meantime, said that the EU’s reaction to Iran’s 60-day ultimatum on JCPOA shows they are angry with our decision.

After Tehran suspended some of its commitments on Wednesday, the top European diplomats said they will not bend to any ultimatums.

“We strongly urge Iran to continue to implement its commitments under the JCPoA in full as it has done until now and to refrain from any escalatory steps,” the officials noted in a statement.

Then on Thursday, EU Foreign Policy Chief Federica Mogherini and the foreign ministers of France, Germany, and the UK released a joint statement, saying, “We regret the re-imposition of sanctions by the United States following their withdrawal from the JCPOA” and said they would stay fully committed to “the preservation and full implementation” of the JCPOA, which they described as “a key achievement of the global nuclear non-proliferation architecture, which is in the security interest of all.”

Tehran announced on Wednesday its decision to partially suspend its compliance with the JCPOA in response to the US withdrawal and the failure by European signatories to alleviate the damage done by American sanctions.

Washington withdrew from the internationally-endorsed 2015 nuclear deal with Iran, re-imposed the toughest-ever sanctions against the country and started a plan to zero down Tehran's oil sales.

In return, Iran's Supreme National Security Council (SNSC) announced in a statement on Wednesday that the country had modified two of its undertakings under the Joint Comprehensive Plan of Action in return for the US abrogation of the deal and other signatories’ inability to make up for the losses under the agreement, warning that modifications would continue if the world powers failed to take action in line with their promises.

It reminded the G4+1 of Iran's good will during the nuclear talks, implementation of the nuclear deal and giving sufficient time to the other signatories to implement the deal, saying that it is now their turn to prove their good will and adopt serious and practical measures to protect the nuclear deal.

Iranian President Hassan Rouhani in a letter on Wednesday informed the Group 4+1 on stopping implementation of a number of Tehran's undertakings stated in the 2015 nuclear deal.

Iranian Deputy Foreign Minister for Political Affairs Seyed Abbas Araqchi submitted the letter to the ambassadors of the G4+1 to Tehran after they were called to the foreign ministry on Wednesday morning.
The letter contains decisions by the SNSC to "halt implementation of a number of the Islamic Republic of Iran's undertakings under the nuclear deal".

Also, another letter was sent by Iranian Foreign Minister Mohammad Javad Zarif to High Representative of the European Union for Foreign Affairs and Security Policy Federica Mogherini on Wednesday morning to inform her of details of Iran's measures.