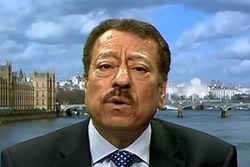 Abdel Bari Atwan, the editor-in-chief of Rai al-Youm newspaper, warned of the rise of a new war between Israel and the Palestinians in Gaza Strip this Summer, saying that the next battle will lead to the fall of Netanyahu's government.

RNA - Atwan wrote on Saturday that the assessments presented by Israeli generals and the Palestinian resistance groups' spokesmen are indicative of a likely war this Summer.

"The Israelis' experience in interactions with the Gaza Strip both during and after the occupation have cost them a lot and any new aggression will incur more financial and humanitarian losses on the next Israeli cabinet than those suffered by the cabinet of Ehud Olmert during his aggression against Lebanon in 2006," he added.

"Also, the resistance groups are well aware that any new Israeli aggression is aimed at their crackdown and they will confront the occupiers with all their power and missiles," Atwan wrote.

He noted that the Palestinian revolution is returning stronger than any other time and any new war in the Gaza Strip could put an end to Netanyahu's era as it did with Olmert in the invasion of Southern Lebanon.

The Gaza escalation erupted last week following the deaths of four Palestinians in an Israeli air raid on the coastal sliver and the regime’s live fire targeting Gaza protesters.

In response, the Palestinians fired some 700 rockets at the occupied lands in 3 days, killing four Israelis and injuring 200 others.

According to Fars News Agancy, Israel’s “Iron Dome” only intercepted 240 of the 690 projectiles fired from Gaza, raising serious questions about the effectiveness of the missile system.

After three days of deadly Israeli airstrikes and retaliatory Palestinian rocket attacks, the two sides reached a ceasefire agreement last Monday with the help of Egyptian and Qatari mediators.