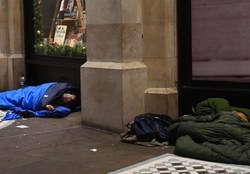 All is not good in Britain. According to the United Nations, Britain is a country where a fifth of the population lives in poverty.

RNA - The world body says many people have to choose between eating or heating their homes and children go to school hungry. Homelessness is rising and basic services are in crisis, leaving many struggling to cope.

This is the damning indictment, delivered by a UN official, not of a developing economy or a war-torn nation that was turned into a failed state by the United States and its Western allies but the UK – the world’s fifth biggest economy.

The UN’s Special Rapporteur on extreme poverty and human rights, Philip Alston, says the UK government’s austerity-driven policies in the years since the 2008 financial crash have created “a harsh and uncaring ethos” that has removed the social safety net and is driving up poverty. No wonder Prime Minister Theresa May had to resign. This wasn’t just about Brexit.

However, the report comes after he visited the UK and spoke to many British people to assess the state of the country.

This should stun no one. A fundamental overhaul of the benefits system and widespread cutbacks have placed increasing pressure on already stretched and underfunded services including the police and doctors. The punitive, mean-spirited and often callous approach taken by government to supporting society’s most in need has driven further inequalities. Add to this the ever-increasing military budget for foreign wars and you have a recipe for social disaster.

- Significant increases in homlessness and rough sleeping in the years since 2010 – the charity Shelter estimates 320,000 people in Britain are now homeless and research by another charity, Crisis, suggests 24,000 people are sleeping rough, more than twice the government's estimate.

- Over a tenth of the population experiencing fuel poverty.

- Widespread use of food banks, with more than 2,000 in the UK today compared to just 29 at the height of the financial crisis.

- Children are so hungry they are eating from bins.

Nor is that all. The government has failed to acknowledge the seriousness of the plight caused by poverty in the UK, which doesn’t monitor in a comprehensive way. Instead, it’s busy helping other countries like Saudi Arabia to create a similar situation in desperate places like Yemen.

According to Fars News Agancy, the British government should hold its head in shame. It is free to claim the UN report is poorly researched. However, those who have lived in Britain know it better than anyone else that the situation is worse than what the UN had to say.

This includes women and single mothers selling themselves to feed their children, school children having no money to buy food, and many more who have to go to bed hungry with just one meal a day, most of which is cheap and unhealthy processed food anyway.

The UK’s growing social inequalities and struggles to deliver inclusive growth are highlighted in the World Economic Forum’s Inclusive Development Index 2018 as well, which says the country is lagging behind many of its peers. It ranks 21st overall, falling near the bottom on many of the key indicators including healthy life expectancy and income inequality. So much for the world’s fifth biggest economy.