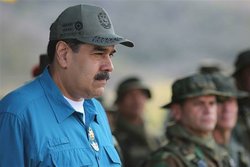 Venezuelan President Nicolas Maduro has finally met representatives of the International Contact Group (ICG) and from Uruguay in the presidential palace.

RNA - Previously, the vast majority of this EU-led group refused to recognize Maduro as the constitutional president, while Maduro has flatly rejected solutions proposed by the ICG. The meeting means the EU has finally come to its senses and that both sides have made great concessions. On the same day in Oslo, representatives of the Venezuelan government and the opposition accepted Norway's mediation. The two sides openly admitted having direct conversations with each other.

Maduro has been calling for talks with the opposition for some time, but there was no positive response. As the door to dialogue opens in light of the failed coup attempt backed by the United States and its allies, the international community is seeing a glimpse of hope for the final resolution of the foreign-instigated crisis.

Washington’s decision to recognize Venezuela’s law-breaker Juan Guaidó and appointing the neoconservative regime change hawk Elliott Abrams as special envoy, was simply designed to sow seeds of subversion and revolt within the country’s government and military.

This followed National Security Adviser John Bolton - a key neocon architect and cheerleader for the 2003 invasion of Iraq and who has also advocated regime change in Iran, Venezuela and elsewhere - calling Venezuela, Cuba and Nicaragua a “troika of tyranny,” a hypocritical characterization reminiscent of Bush’s “axis of evil,” and one that utterly ignores the far worse, but far more subservient, regimes backed by the Trump administration.

On January 23, however, when the self-proclaimed leader of the National Assembly Guaido declared himself interim president, he quickly received recognition from more than 50 countries, including the United States and those in Europe and Latin America. Many observers believed that without "international recognition," the Maduro administration would cede power as a result of a lack of "legitimacy of governance". A regime change in Venezuela thus appeared inevitable as Maduro's administration suffered from a series of economic sanctions, diplomatic isolation and political interference from other countries.

It seemed that attempts by Guaido to "break the camel's back with a final straw" were carried out frequently, but ineffectively, be it the "humanitarian aid standoff" at the Venezuela-Colombia border in February, the sabotage attack that caused massive power outage in March, or the "Operation Liberty," "Operation Freedom" and the "End of the Usurpation" campaigns launched by Guaido in April.

After four months of drama, the "parallel government" has not fundamentally undermined the Maduro government, which is still in firm control of the situation in Venezuela. In contrast, the opposition has been widely questioned by its supporters both at home and abroad after so many botched operations. This was especially true in April when Guaido caused widespread resentment among Venezuelans by openly claiming to seek foreign military intervention after a failed coup.

According to Fars News Agancy, Venezuela has been plagued by deteriorating quality of life, a collapsed economy and soaring hyperinflation in recent years. It is true that part of the government's economic policies have gone wrong. However, after venting their grievances, the public came to a sensible realization that the current predicament is an inevitable result of the decade-long journey on a wrong development trajectory as well as Washington’s medlding.

The regime changers have finally woken up to the fact that Maduro cannot be forced out of power by threats. The political and social crisis of Venezuela is rooted in foreign meddling and its own economic imbalance and stagnation of production. Both the government and the opposition recognize the need for change, but it is the people of this country that are responsible for discussing and figuring out "how to change" their country to become a more powerful economy.

Predictably, the ongoing dialogue is of a long-term nature, and it is unrealistic to expect results after one or two rounds of talks. If one side attempts to speed up the process by setting up "preconditions" and "timetables," it will only push the situation back to the previous state of crisis, chaos and impasse. Time and patience are needed to address the ongoing crisis. In the meantime, Guaido should stop asking for a military intervention from the US that he knows will only fuel further public hatred toward the opposition.

He knows better than anyone else that the US has always opposed - whether by slaughter, spies or sanctions - any government or movement that seeks to freely choose its own political and economic path if it diverges from the corporate capitalist order backed by Washington and company.

Washington has long sought to crush the boldly defiant Bolivarian revolution, just as it has crushed countless popular revolutions and movements before. The elected Maduro administration is far from perfect. But to advocate regime change in Caracas while supporting far worse tyrants around the world just because they are US-friendly is an exercise in the blatant, bloody hypocrisy for which the United States has long been infamous around the planet, especially among its poorer parts and peoples.