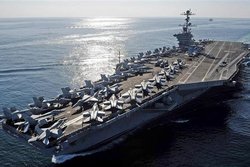 A new survey has shown that the majority of American people oppose a military conflict with Iran amid heightened tensions between the two countries.

RNA - The Reuters/Ipsos public opinion poll, released on Tuesday, showed that 60 percent of Americans opposed a preemptive attack against the Islamic Republic while only 12 percent advocated for striking first.

The survey also revealed that nearly half – 49 percent – of American people disapproved of US President Donald Trump’s policies regarding Iran, with 31 percent saying they “strongly” disapproved.

Additionally, the opinion poll indicated that 53 percent of Americans considered Iran as either a “serious” or “imminent” threat to the US while 51 percent believed the two countries would go to war “within the next few years.”

The poll also showed that 61 percent of Americans still supported the nuclear agreement that Iran signed with six world powers in 2015.

The Reuters/Ipsos public opinion poll was conducted online across the United States between May 17 and 20. The survey gathered responses from 1,007 adults, including 377 Democrats and 313 Republicans, and has a precision measure of 4 percentage points.

Tensions started to mount between Tehran and Washington in May last year, when Trump pulled his country out of the 2015 nuclear deal with Iran, officially known as the Joint Comprehensive Plan of Action (JCPOA), and re-imposed harsh sanctions against the Islamic Republic in defiance of global criticisms.

The tensions saw a sharp rise on the first anniversary of Washington's exit from the deal as the US moved to ratchet up the pressure on Iran by tightening its oil sanctions and sending military reinforcements, including an aircraft carrier strike group, a squadron of B-52 bombers, and a battery of patriot missiles, to the Middle East.

The Trump administration said the deployment of US forces in the Middle East was a “defensive” move against Iran, claiming it had received reliable evidence from various sources that showed Tehran was conspiring to attack the US interests and those of its allies in the region.

Iranian authorities have frequently announced that the allegations raised by Washington regarding Iran's threat to conduct attacks on US interests were based on “fake intelligence.”

The deployment of US special forces to the Persian Gulf came following a series of attacks on oil tankers off the coast of the United Arab Emirates.

Iran has warned that such sabotage operation may be part of a general ploy to target Iran amid increasing regional tensions.

Several senior American politicians have warned that Iran hawks in Trump's team are cooking up intelligence in order to convince Trump that Iran is indeed a threat, putting Washington on the same path that led to the ill-fated invasion of Iraq back in 2003.

Iran has dismissed the possibility of war despite the US military deployment to the Persian Gulf. The US president has also reportedly ordered his administration to avoid a military confrontation with Iran.