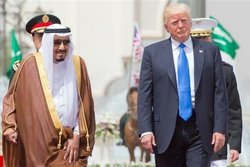 US President Donald Trump wants to get close to Saudi Arabia for many reasons particularly because Riyadh is hostile to Iran and friendly to Israel, American writer and academic James Petras says.

RNA - A US senator has warned that Trump may use the tensions Washington has been stocking with Iran as a pretext to sell more bombs to the Saudi regime without congressional approval.

In a series of tweets on Wednesday, Chris Murphy, the Connecticut Democrat and member of the Senate Foreign Relations Committee, said that the Trump administration may cite tensions with Iran as an “emergency” to justify supplying more arms to the Riyadh regime.

“I am hearing that Trump may use an obscure loophole in the Arms Control Act and notice a major new sale of bombs to Saudi Arabia (the ones they drop in Yemen) in a way that would prevent Congress from objecting. Could happen this week,” Murphy said.

“Arms control law allows Congress to reject a sale to a foreign country. But Trump would claim the sale constitutes an ‘emergency’ which means Congress can't take a vote of disapproval. It would go through automatically,” he added.

Petras told Press TV on Friday that “there is a half truth in that statement. It’s very evident that Trump wants to get close to Saudi Arabia for many reasons particularly the very reactionary policies of Saudi Arabia towards Iran and other independent countries.”

“The selling of arms is one aspect of that relationship between Trump and Saudi Arabia. But the other fact is that Trump has very few allies in the region. Trump has a policy of using third parties to carry out his policies with Afghanistan, Pakistan and now we see this in relationship to Iran,” he stated.

“We have to think about the multidimensional aspects of US policy with Saudi Arabia. It’s economic, it’s political, it’s social. Don’t forget that the Saudis have been working covertly with Israel and that’s another fact that Trump is acting on behalf of Israel, developing ties with the Saudis, and more important domestically Trump is looking for distraction because of his problems with the Congress in the United States and the judicial system and with the fact that he is facing the impeachment proceedings. So all of this has to do with building up arms in the Middle East including arming of Saudi Arabia,” he noted.

Washington’s arms dealings with Riyadh have come under scrutiny over the Saudi-led war against Yemen, which has left a heavy civilian death toll, and the gruesome state-sponsored murder of dissident Saudi journalist Jamal Khashoggi in October 2018.

Last month, a bipartisan majority in Congress voted to halt US support for the protracted Saudi military aggression against Yemen but Trump vetoed the legislation.

Speaking on condition of anonymity, three US officials had told NBC News that the Trump administration was poised to unveil arms sales to Saudi Arabia, without elaborating on more details.

Republican Senator Lindsey Graham stressed that he would oppose the government if it decided to go around Congress, citing Khashoggi’s killing.

“We are not going to have business as usual until that issue is dealt with,” Graham told CNN.

Saudi Arabia is the United States’ largest arms client, with over $129 billion in approved purchases.