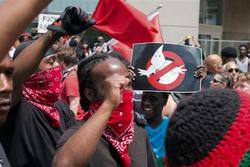 A planned rally by a Ku Klux Klan-affiliated group in Dayton, Ohio has been outnumbered by hundreds of counter-protesters.

RNA - The nine members of the Honorable Sacred Knights of Indiana gathered in Dayton to hold the rally on Saturday when they were met with counter-protesters.

News about the KKK rally spread nationally earlier this week after the group had received a permit last month for the event.

Dayton Police Chief Richard Biehl told the CBS Dayton affiliate he was "very pleased" with security, though he noted, "This clearly was a safety challenge for our city and our community."

According to the city officials, around 500 to 600 counter-protesters gathered in the area of Courthouse Square.

Also, over 200 people attended an NAACP (The National Association for the Advancement of Colored People)-sponsored "Love" event in downtown Dayton.

Mayor Nan Whaley praised those who attended the counter-event "to celebrate what Dayton is all about."

"We are united against hate," Whaley said. "We are a community that no matter who you love, where you come from or what you believe, you are welcome in Dayton."

The KKK hate group is the name of three movements in the US, which have advocated extremist reactionary currents such as white supremacy, white nationalism, and anti-immigration.

Being one of the oldest and most infamous hate groups in the US, the Ku Klux Klan has targeted African Americans, Jews, Catholics and immigrants, according to the Southern Poverty Law Center, which studies hate groups.

US President Donald Trump has faced mounting criticism for failing to disavow the endorsement of former KKK leader David Duke.