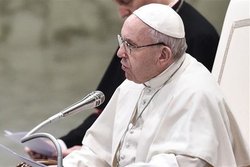 Pope Francis has denounced as “cruel” the US administration’s policy of building border walls and separating migrant families.

RNA - The pontiff said in a wide-ranging television interview with Mexico's Televisa on Tuesday that he was willing to tell US President Donald Trump in person that it is wrong to build border walls and appeared to warn him not to resume the policy of separating children from their parents.

Trump has vowed to crack down on illegal immigration in part by building the wall on the border with Mexico but more than three years into his term, the US president has failed to fulfill that promise.

Last year, the US administration in Washington separated more than 2,500 children from their families before international outrage forced Trump to halt the practice and a federal judge ordered them reunited.

"I don't know what's happening with this new culturee of defending territories by building walls. We already knew one, that (one) in Berlin, which brought so many headaches and so much suffering," he said.

"Separating children from their parents goes against natural law, and those Christians...you can't do it. It is cruel. It is among the greatest of cruelties. And to defend what? Territory, or the economy of a country or who knows what," the Pope said, adding that such policies were "very sad.”

Asked if he would tell Trump the same thing to his face if the president were sitting opposite him instead of the reporter, the pontiff said, "The same. The same because I say it publicly...I have even said that those who build walls end up being prisoners of the walls they build."

The Trump administration’s policy of “zero tolerance” in May last year resulted in thousands of children being separated from their parents at the southern border and placed into custody.

The controversial policy, which called for the criminal prosecution of all adult migrants who were detained after illegally crossing the southern US border, created a massive outcry and the backlash forced Washington to walk it back just three months later.

The United Nations, immigration and child advocates and Democratic lawmakers have all condemned the practice of separating families at the border.

The bulk of the separations involved Central Americans, who make up the majority of families crossing the southwest border.