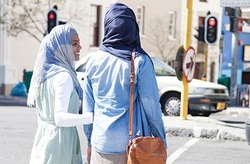 Thousands of women are wearing a hijab during the Muslim’s holy month of Ramadan to raise awareness about the head covering and educate people on fighting Islamophobia, according to the founder of the World Hijab Day Organization.

RNA - From Belarus, Brazil, Canada, Germany Malaysia, New Zealand, UK, the US and all over the world, women are participating in the group’s Ramadan Challenge for the second straight year, Nazma Khan told Anadolu Agency.

“By inviting women of different faiths and backgrounds to wear the hijab, it normalizes the hijab,” she said, adding, “Thus, it no longer stays something ‘unknown’ which some might ignorantly fear or see it as a threat.”

But some women have been so inspired they have taken it upon themselves to take the challenge a step further and decided to fast for 29 or 30 days as required by the Islamic faith.

“For me, participating in the 30-day hijab challenge and fasting is taking a walk in someone else shoes,” World Hijab Day Ambassador Ashley Pearson, who lives in Arkansas, told Anadolu Agency, noting, “I wanted to learn what's is like to for others and understand what they may go through."

Pearson even visited a local mosque and made friends. She joins them during the celebratory iftar, or fast-breaking meal every night of Ramadan and enjoys getting to know and learn the Muslim culture.

“I am fasting during the Ramadan Challenge and so far I think it has been good for me,” she said on day 15 of the fast, adding, “It can be a bit difficult at times, but it can truly teach you self-discipline.”

One adherent of the Kemetic Orthodox religion sees the hijab as giving her control as to how she is perceived by the outside world.

“Many women complain that it is oppressive, but I disagree wholeheartedly. I see hijab as freeing, liberating,” Siobhan Welch stated, saying, “I have control over who sees me, how much of me they see. I have power over my body, no one else.”

"Stop and think a moment before you judge me," the 47-year-old told Anadolu Agency, noting, “I've been wearing hijab daily for over [four] years now. It is not just religious, as it is not required in my religion. But I feel that doing so shows respect, love, and humility before God.”

Sania Rukhsar Zaheeruddin, a 25-year-old Muslim Indian medical student who does not normally wear the hijab, is taking part in the challenge and sees it pretty much the same way.

“In a world where Islamophobia exists this is like a power tool to Muslim women. It helps us to be more confident, gives us an opinion globally, low key takes away the fear of not being socially accepted,” she said.

For Zaheeruddin, the importance of the challenge is to show the “veil does not change the fact that we are all humans”.

“Muslim women are projected as suppressed, oppressed and low forms at times by the modern-day world. And since the conceptual Islamophobia is spreading like wild fire it's important for us Muslim women to feel the same as others,” she added.

World Hijab Day was created in 2013 to encourage women of all faiths and backgrounds to wear the hijab in support of Muslim women. It is celebrated annually February 1.

In 2017, World Hijab Day became a nonprofit organization with a mission to fight discrimination against Muslim women through awareness and education, according to the group’s website.

Muslims march against Islamophobia in France