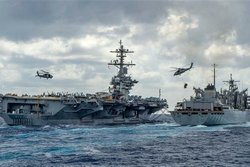 The Pentagon is unveiling a plan Thursday that could see up to 10,000 more troops in the Middle East, US officials claim.

RNA- US officials speaking to various media outlets on Wednesday said the White House is to decide whether to approve the plan to send all or just some of the requested forces, a figure some outlets put ath 5,000.

According to the officials, deployment of additional forces has nothing to do with what Washington refers to as Iran’s “threat.”

The Pentagon will brief the White House on the plan on the heels of the Trump administration’s escalation of tensions with Tehran.

"As a matter of long-standing policy, we are not going to discuss or speculate on potential or alleged future operations or plans," said US Air Force Colonel Patrick Ryder, a spokesman for the US Joint Chiefs of Staff.

President Donald Trump has resorted to blacklisting the Islamic Revolution Guards Corps (IRGC) in the wake of withdrawal from the Iran nuclear deal and tightening sanctions against Tehran.

Iran has time and again asserted that it is not seeking war but stands ready to defend its interests in the region.

Iran has played down Washington’s belligerent posture, ruling out the possibility of war between the US and Iran.

There were, meanwhile, reports that the US president is using legal loopholes to sell even more arms to Saudi Arabia amid tensions with Iran.

"I am hearing that Trump may use an obscure loophole in the Arms Control Act and notice a major new sale of bombs to Saudi Arabia (the ones they drop in Yemen) in a way that would prevent Congress from objecting. Could happen this week," warned Democratic Senator Chris Murphy said in a tweet on Wednesday.

Trump has been a staunch supporter of the monarchy despite its gross violation of human rights as well as the incessant bombing of the impoverished Yemen.